Have the courage to soar to greater heights. 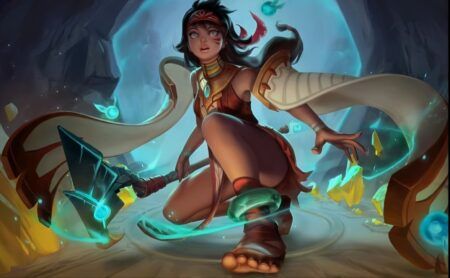 Tied to the Blazing West in-game event, Mathilda is the newest mage to be introduced to Mobile Legends: Bang Bang. The game’s 101th hero design is based on Native Americans, who carries an eagle-head staff.

Mathilda has more mobility compared to your traditional mage, and according to Moonton, can be played as a support or an assassin.

Mathilda applies a Soul Mark to the targeted hero and circles around the target for up to 2 seconds. During this period, wisps will rush to nearby enemies, each time dealing 40 / 45 / 50 (+10% Total Magic Power) Magic Damage.

After casting this skill or reaching the time limit, she will rush to the target, knocking back enemies on the path, stunning them for 0.6 seconds, and dealing 320 / 360 / 400 (+120% Total Magic Power) Magic Damage.

Mathilda gains Ancestral Guidance while moving. When it is fully charged, her next Basic Attack will be enhanced, dealing 150 (+100% Total Physical Attack) (+100% Total Magic Power) Magic Damage to the target and increasing her Movement Speed by 50% that will rapidly decay in 2.5 seconds.

Mathilda resonates with the power of ancestors and summons wisps that surround her for 3.5 seconds. When her movement distance is increased, more and more wisps will be attracted to her, capped at 6 wisps.

After using Guiding Wind, the hero will be guided to Mathilda, and both of them will gain the same Movement Speed.

When using this skill during Circle Eagle, Mathilda will not change her position.

The hero will lose Guiding Wind after leaving the field for 5 seconds. Mathilda will reclaim all Guiding Wind if it is used by any allied hero.

Since there are two parts to two of her damaging skills — Soul Bloom and her ultimate Circling Eagle — timing is everything, and this sets apart great Mathilda players from good ones.

Even though she does have a straightforward combo that opens with Soul Bloom, into her second skill or ultimate, due to her flexible abilities, Mathilda performs best when she adapts to the situation on the battlefield. For example, sometimes you’ll need Guiding Wind to catch up to a target, but at other times, the extra shield in the midst of multiple enemies might be more beneficial. No wonder Moonton gave her a high difficulty!

Choose the Mage Emblem for Mathilda, with a focus on movement speed by putting points into Agility. From there, Observation or Catastrophe gels well with her kit, and depending on the enemy lineup, Magic Worship or Impure Rage.

Since Mathilda has inbuilt bonus movement speed and a dash in her kit, Flicker is not essential. You can choose Flameshot or Execute to finish enemies off, or Aegis for even more shields.

As she is very reliant on casting her first skill, Soul Bloom, early mana regen is important. Demon Shoes, Glowing Wand, and Holy Crystal are core items in any item build. From there, you can adapt with Necklace of Durance, or Oracle and Immortality to up your defenses. Some builds also add Ice Queen Wand for the slow so that Mathilda can better chase enemies.