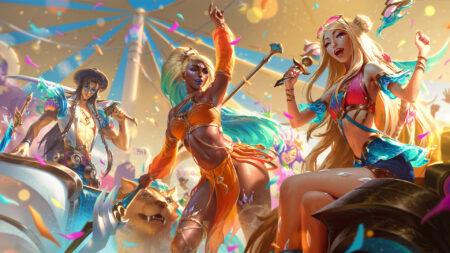 He clarified that this tier list evaluates champions based on their innate power in the current meta on patch 12.18, the patch that Worlds will be played on. It doesn’t reflect the state of solo queue or pro play, which have different tendencies, and will present tier lists for those separately.

Nonetheless, there will definitely be some overlap, and it’ll be interesting to see if these strong champions will be banned or let through during drafts at Worlds, and how teams form team compositions around them, counter them, or ignore them altogether.

Worlds 2022 tier list: LS puts Seraphine and Lux at the pinnacle alongside Caitlyn in the bot lane

Caitlyn was recently buffed in patch 12.16. The base AD and AD ratio of her Headshot passive were increased, while her ultimate, Ace in the Hole, is slightly stronger based off her critical strike chance.

This is the second time Headshot was buffed this year, the first being patch 12.12 which not only increased its AD stats, but also critical strike chance ratio.

Since the game-changing 12.10 Durability Update, she has received multiple buffs while other AD carries who were once unrivaled. Zeri, Sivir, Draven, and for a short period, Miss Fortune, all got nerfed in recent updates, which is why Caitlyn has risen to the top.

Even though Riot Games did adjust Seraphine post-patch 12.10, the utility she brings to extended team fights in the form of heals, shields, and crowd control is too effective in the current meta.

“Lux-Seraphine as a combo is very, very strong against pretty much every single bot lane duo,” explained LS. “But I think it has higher potency because Lux-Seraphine absolutely dominates Caitlyn, which I expect to be the premiere AD carry coming into the world championship.”

He also placed Seraphine in the overpowered Z-tier in mid lane alongside Ivern and Ziggs.

In the support role, he expects the enchanter meta to prevail with the likes of Soraka, Janna, and Sona. In the jungle, recently buffed champions like Hecarim and Fiddlesticks are likely to excel, while Fiora is the sole Z-tier champion he placed in the top lane.