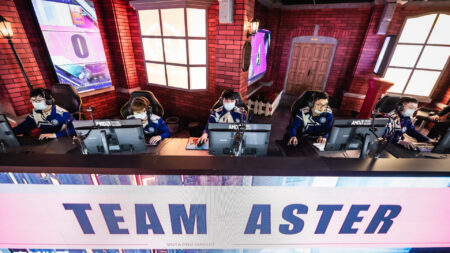 Team Aster is the second Chinese team to qualify for the ONE Esports Singapore Major.

Team Aster punched their ticket to the Major when they defeated Team MagMa, and went up to a 5-1 record in the DPC China upper division standing. The match win separated Team Aster from the bottom four teams that have at least three match losses.

The ONE Esports Singapore Major has four slots allotted to the Chinese region, which leaves Vici Gaming, Elephant, and PSG.LGD in the running for the final two spots.

Team Aster was one of the teams in the Chinese region that struggled during the DPC hiatus. Prior to the COVID-19 global pandemic which caused the halt of the season, Team Aster won the last DPC event, StarLadder Season 3 Minor.

They struggled when competitions adopted a regional format. But, at the end of 2020, Aster did show some signs of improvement with two runner-up finishes in the China Dota 2 Pro Cup Season 2 and Huya Winter Invitational events.

Team Aster also went through many roster changes in 2020. But both Lin “Xxs” Jing and Ye “Borax” Zhibiao, formerly known as BoBoKa, became the reliable constants of the team. Aster then added two talented core players in Du “Monet” Peng and Liu “White丶Album” Yuhao, a few days before the team released Song “Sccc” Chun from the roster.

The final piece of Team Aster’s roster puzzle was added when they decided to part ways with Pan “Fade” Yi. Aster then added legendary Chinese support player Zhang “LaNm” Zhicheng as the team’s coach, up until he joined the active roster.