Time and tide wait for no man. 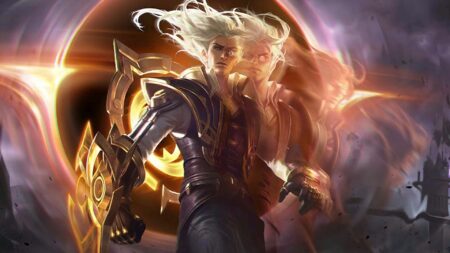 Natan, the Spacetime Walker, is the latest Mobile Legends: Bang Bang (MLBB) marksman hero to debut in the Land of Dawn.

The two most unique features about this time-traveling hero are his boomerang basic attack, and ultimate Entropy?, which shares a resemblance to Claude’s Battle Mirror Image skill, but functionally operates quite differently.

Learn about the hottest new marksman hero in this Mobile Legends beginner’s guide.

Natan summons a Reverse-Clone that lasts 8 seconds within an 8-yard range. The Reverse-Clone inherits 30% / 32.5% / 35% of his attack attributes and copies all of Natan’s movements and attacks reversely.

Use Again: Natan dashes for a certain distance toward the Reverse-Clone and enters a 2 seconds cooldown.

If the Reverse-Clone is too far away from Natan, it will disappear.

Passive – Theory Of Everything

Each time Natan or his Reverse-Clone hits an enemy with a skill, he gains a stack of Entanglement. Each stack increases his Attack Speed by 15% and Movement Speed by 7.5% for 5 seconds, up to 6 stacks.

Tips and tricks for MLBB Natan, the game’s newest marksman

Marksman Natan does not possess any skill that allows him to dash away from enemy heroes, so Flicker is a must. Even if you manage to cast Interference! successfully, enemy heroes with multiple dashes (and there are many in Mobile Legends), like Paquito and Benedetta can still catch up.

This is why Flicker is most valuable for this immobile marksman.

You have two options when it comes to Emblem sets. Going down the conventional marksman route, you can opt for these stats:

Fatal and Doom both increase your critical attack chance which is great for a heavy basic attack hero like Natan. You don’t need additional Physical Attack from Bravery, and neither do you need Attack Speed from Swift since his passive “Theory of Everything” naturally boosts that stat.

In the early levels when cooldown of skills is high, stacking his “Theory of Everything” passive is much slower. Agility’s additional two movement speed per level and Killing Spree’s additional 20% movement speed for five seconds will help you maneuverer and reposition better as you scale up for late game.

Moonton’s recommended full item marksman build allows him to dish out damage while still being durable:

You can also swap out Wind of Nature and Blade of Despair items for Scarlet Phantom and Endless Battle. An alternate to Haas’s Claws, Wind of Nature gives 10% lifesteal and two seconds of immunity to physical damage, which would come in handy if you’re up against fed physical damage assassins and other marksmen.

Rated as a high-difficulty marksman, there are no fixed combos for Natan. Instead, you should aim to weave his basic attacks in between skills.

Casting his second skill, Interference! before Superposition guarantees that his first skill hits.

Everything else depends on the marksman player. For a start, up your first skill then head to the Gold Lane during the laning phase. Besides positioning, the next most important thing is knowing how to position his Reverse-Clone when Entropy? is cast, which takes experience and time to master.