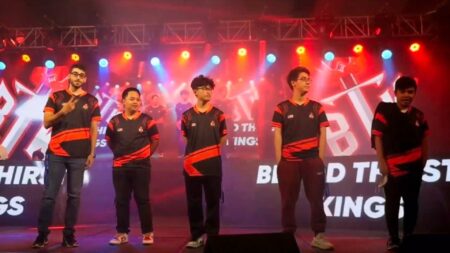 North America’s BTK proved that they still have what it takes to go up against some of the best, after outlasting SIBOL’s Mobile Legends: Bang Bang team 3-2 at a showmatch during the realme Mobile Legends Cup Season 6 (RMC Season 6) grand final yesterday.

SIBOL’s MLBB squad is composed of Blacklist International members who recently won the gold medal at the 31st Southeast Asian Games. However, the team participated in the showmatch without their star players Johnmar “OhMyV33nus” Villaluna and Danerie James “Wise” Del Rosario.

At first, it looked like BTK would miss the match. They showed up at the very last minute – and were so late that Setsuna “AkosiDogie” Ignacio and his handpicked players almost ended up playing against SIBOL.

The North American squad were also playing without their EXP laner Victor. Filipino player Kier “Ichiji” Sambajon took his place for the showmatch.

In the first game, Ichiji’s Esmeralda almost shut down Kiel “OHEB” Soriano’s signature Beatrix pick. However, a series of misplays by BTK ultimately helped SIBOL get the comeback win at the 23-minute mark.

It seemed like BTK needed a while to find their footing. Ian “Fwydchickn” Hohl then stepped up with Brody in the second game, finding a quick win at the 13-minute mark thanks to a crucial triple kill he pulled off near the midlane.

The third game was a one-sided bloodbath, with SIBOL finishing the match with a 20-2 scoreline. BTK team captain Michael “MobaZane” Cosgun’s Baxia only had a measly 1/7/0 KDA, due to the constant pressure by OHEB’s Karrie and Imam “Hadji” Salic’s Xavier.

SIBOL’s near-perfect third game forced the North American team to make drastic changes to their hero lineup. They responded to the surprise Estes pick with the help of SHARK’s Mathilda, ZIA’s Julian, and MobaZane’s unconventional jungle Thamuz pick. The unusual lineup proved to be effective as they secured the fourth game in dominating fashion, with a 19-5 score.

The North American team kept the pressure on in game five, after MobaZane locked in his signature Balmond. Ichiji then locked in Uranus and SHARK went for Grock, completing what would be an ultra-tanky lineup. The three immediately tried to get map control, forcing SIBOL to play it safe, much to their disadvantage.

In the end, BTK was the one to come out on top with the win, largely powered by MobaZane’s impressive performance on Balmond, finishing the game with a 5/0/1 KDA.

During the post-match interview, MobaZane said that he was a “little bit” proud of his team in the showmatch. When the host asked why MobaZane was not prouder, he said that it was because the SIBOL lineup was missing its star players.

“It would feel better if they had Wise and OhMyV33nus,” he said.

The showmatch was a week-long culmination of BTK’s search for professional teams to play against them during their visit to the Philippines. According to MobaZane, the team visited the country in the hopes of studying the region’s meta and practicing with local teams.