This lone star is all about pain. 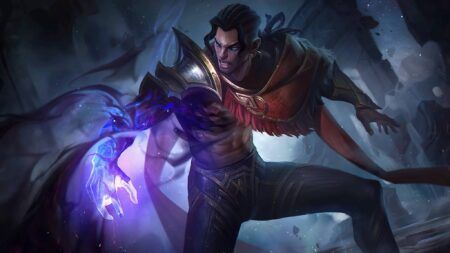 Brody, the Lone Star, is Mobile Legends: Bang Bang‘s newest carry, and he feels and plays quite differently from traditional marksmen.

Brody is able to move while winding up his Basic Attacks (which will be interrupted when casting skills) — at the cost of having longer Basic Attack Animation and lower Attack Speed bonus.

Each Basic Attack deals (+200% Total Physical ATK) Physical Damage, increases his Movement Speed by 30% (which will decay rapidly in 1.2s), and inflicts 1 stack of Abyss Mark on the enemy, capped at 4 stacks.

Each stack of Abyss Mark increases Brody’s damage against the target by 10% and his Movement Speed by 5%.

This skill deals only 50% damage to minions.

Upon hitting the target, he is able to move one more time in the movement direction, gaining 45% Movement Speed that will decay rapidly in 1.2s.

Brody is an advanced marksman hero. He is all about positioning, timing, and split decision making. To truly maximize his damage output, mastery will come into play.

Not everyone will enjoy his playstyle because he’s so different from the rest. He needs to kite and reposition more than your average marksman, but with a kit that requires him to play at max range while also going into the thick of things with Corrosive Strike.

If all Brody does is kite at max range, enemies can just run away. You won’t be able to follow up with further basic attacks or spells. Likewise, you don’t want to be engaging with Corrosive Strike either. A great Brody will be seen navigating a fight by using the various sources of movement speed and spells with constant repositioning in relation to enemies.

As a marksman, there’s no one size fits all combo. The key thing will be to layer your basic attacks in between his spell casts in order to stack Abyss Marks, then finish off with his ultimate.

Like all marksmen, he’s still vulnerable to assassins, mages, and hard crowd control, so general rules still apply. Flicker is a great Battle Spell on him.

Run Marksman Emblem, and put points into Fatal and Doom for added Critical Damage, and Electro Flash, which works perfectly with the bonus movement speed Brody gets from his skills.

Equipment wise, instead of attack speed, you’ll want to build Critical Strike and Physical Attack items. Berserker’s Fury and Scarlet Phantom will be able to fit into any build, while Blade Of Despair gives you extra movement speed.

Due to his playstyle weaving in and out of fights, Brody will highly benefit from a defensive item. If you’ve snowballed the game, you can consider getting it earlier as a third or fourth item to prevent being burst down. Depending on your opponent’s line up, choose between Queen’s Wings and Immortality.