The walking mountain is back in the meta. 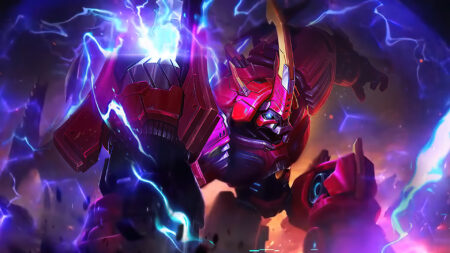 Grock received a massive buff in Mobile Legends: Bang Bang patch 1.6.66, making him viable once again in the meta.

The changes to his passive, Earthen Force, now turns him into a killing machine with offensive items. His ultimate, Wild Charge, now stuns enemies caught in its wake. These changes make him a top tier pick in almost any role.

If you are planning to experiment with the Fortress Titan, here are three emblem sets to get you started on your journey to dominating with the revamped tank hero.

Pull Yourself Together remains the best choice if you opt to play Grock as a roamer. The movement speed increase and hybrid healing sub talents work extremely well with his passive, turning Grock into a reliable roamer with the decreased death timer and battle spell cooldown.

As a hero who relies on positioning, getting either Flicker or Sprint is reliable, as he will be able to use it more frequently in team fights.

The new changes to Earthen Force makes Weapon Mastery a desired choice in the current meta. Since building the Fortress Titan offensively is now a must, getting Weapon Master increases his damage even more in the latter parts of the game.

This emblem works best in the gold lane, as a fully charged Power of Nature will instantaneously kill any marksman heroes caught in the swing.

If you want to test out Grock in the EXP lane, High and Dry is an emblem you have to check out. Since the Fortress Titan already has respectable damage output, getting High and Dry makes him much more lethal when he’s alone in a lane.

The extra 6 percent damage increase is huge, and will be a game changer once he reaches level four. This effect, coupled with his revamped skills, makes him a solid choice against fighters in the EXP lane.