It’s the perfect smoke for Bind. 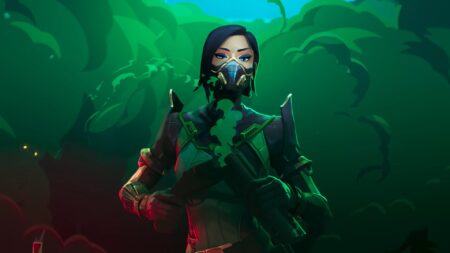 Bind can be a tricky map to defend, especially if attackers use well-coordinated agent abilities to hit a site. Duelist agents like Jett or Raze can jump out of Hookah and rush onto the site, easily overwhelming the defenders.

This particular Viper one-way smoke can help players ward off aggressive plays and lock down B site on Bind by slowing down fast Hookah pushes.

Choosing an agent who can successfully hold sites is a key factor in winning games. Despite the heavy nerfs to Viper in Valorant patch 4.04, this hybrid controller and sentinel is still a strong agent who can effectively defend choke points.

What is a one-way smoke in Valorant? Controller agents in Valorant are able to control an area by denying vision to opponents. These agents can also place one-way smokes, which cut off opponent sightlines but still allow their team to spot enemies through the edge of the smoke.

This is achieved through precise smoke placement on certain parts of the map and can be very effective at stopping a push dead in its tracks.

This Viper one-way smoke can stop attackers from entering Hookah

Hookah is an important area to control on Bind for attackers and defenders. Attackers will often use Raze’s Boom Bot to clear Hookah before entering. They may also use Omen’s Paranoia flash or even Breach’s Fault Line stun to push opponents away from the area or help them take down any defenders playing up close.

If your opponents are consistently pushing Hookah aggressively, you can try using this Viper one-way smoke to prevent them from entering the area altogether, instead of waiting inside Hookah and contesting it. At the start of the Buy Phase, go to Hookah and equip Viper’s Toxic Screen while standing on top of the red rug. Next, aim at the bottom of the diamond-shaped pattern.

Face the wall across the teleporter and align Viper’s agent ability HUD to the top of the wooden box on Hookah. Hit left-click to drop the wall.

Now you have a one-way smoke on Hookah that Viper can use when she activates her wall. You’ll get a clear shot on opponents entering Hookah by standing on top of the metal tube on B site.

On top of that, what’s great about this one-way smoke is that it will also cover A Short for your teammates on A site.

To get the most out of Viper’s Toxic Screen, make sure to communicate with your teammate on the B site. It would be best to have them hold B Long or B Garden since anyone standing on the metal tube will be exposed to a push from Long.

Once Viper starts running low on fuel, she can drop her Snake Bite molly to stop attackers from entering Hookah. Just be careful of Jett’s Tailwind dash or Raze’s Blast packs, as both these abilities can be used to close the distance.