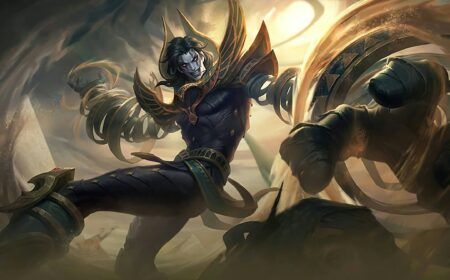 Khufra is one of the most difficult tank heroes to play against in Mobile Legends: Bang Bang. The crowd control effect from this tank hero can single-handedly lead teams to victory.

Even so, in the last two MPL leagues in Season 6 and 7, pure tanks have become less popular due to the changing meta of professional MPL teams.

In the past two seasons, roamer and tank heroes have been replaced by fighter heroes, and most recently, support healers thanks to the Nice one, Baby strategy.

It didn’t stop there. In season 7, the meta evolved to favor the roaming healer, with heroes like Mathilda, Angela, and Rafaela at the forefront of this meta.

As a result, pure tank pro players either had to adapt or sit it out. EVOS Legends LJ and DreamS for example, two quality Season 7 grand finalist tankers didn’t get much play time because of the meta.

How did Khufra suddenly become a must pick in the MPL MY and MPL PH playoffs?

Nobody thought that Khufra would return to pro play anytime soon, for he isn’t even close to any of the S-tier roaming tanks at the moment. Yet, during the MPL PH and MPL PH playoffs, he started to resurface again.

Remarkably, he can still be played very effectively in the current meta despite the high reliance on supports.

According to an Indonesian analyst Ryan “KB” Batistuta, he was picked simply because Ling and Lancelot are often drafted as junglers. The most text book way to counter these two assassin heroes is with Khufra.

Secondly, there are also teams like Execration, Todak, and RSG MY that singled out Khufra as the second best option after Jawhead, even when the opposing jungler isn’t an assassin.

In the MPL MY Season 7 grand final between Todak and RSG MY, Khufra appeared in five of the six games played, and the team who used him always won.

Could Khufra be a contested pick at MSI 2021?

For MPL ID teams at least, the emergence of Khufra is good news for EVOS Legends and Bigetron Alpha representing the region at the upcoming MSC 2021.

Both teams have very strong tank players. EVOS Legends’ LJ is more candidly known as “Mr. Khufra Indonesia”, while Bigetron Alpha’s Kyy is also known for his amazing skills on this hero.

Since MPL PH and MPL MY representatives enjoy playing jungler assassins, could EVOS Legends and Bigetron Alpha take advantage of this and secure wins for MPL ID? Or will MPL PH and MPL MY teams find a way to counter him?

READ MORE: RSG MY upset the defending champions to claim MPL MY Season 7