The 3 best heroes to counter Silvanna

Don’t let her detain you. 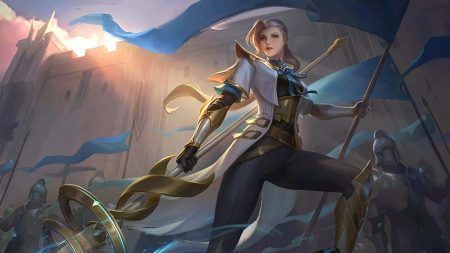 Mobile Legends: Bang Bang fighter hero, Silvanna, has became one of the more popular heroes since the M2 World Championship, with many playing her as a tank or support.

Almost all of Silvanna’s skills are useful for team fight. Cometic Lance is the only skill can stun enemies and give her the opportunity to chase or escape. Her second skill, Spiral Strangling, is a DPS ability, while her ultimate, Imperial Justice, is a hard crowd control skill that confines enemies.

As such, it was not surprising that Silvanna rose in prominence due to her natural ability to lock down enemy core heroes, especially junglers who run Retribution. She also has high mobility, and can trade very well. This is what makes Silvanna S-tier alongside Jawhead, knocking Hilda off her horse.

How can players battle against Silvanna other than running Purify as a response to her ultimate? At M2, it was none other than Burmese Ghouls who demonstrated one of the most effective ways to deal with this hero.

One of the mages with the highest burst damage in Mobile Legends, Kadita can cause quite a dent to Silvanna. Her ultimate, Rough Waves, allows her to escape and be instantly free from Imperial Justice, while simultaneously dealing a lot of damage. Not only that, her second skill, Breath Of The Ocean, can interfere with Silvanna’s movements.

Akai is a versatile tank that is useful in various metas. He is not an S-tier hero, but if you manage to master him, this big panda boy can be useful in different situations.

When facing off against Silvanna, Akai has the potential to completely destroy the enemy’s setup. Usually when Silvanna’s ultimate is used, the core will get ready to attack the heroes trapped inside Imperial Justice. With Akai’s ultimate, Hurricane Dance, enemies who are wrestling around Silvanna will separate and get knocked back, heavily decreasing their effectiveness in the fight.

Burmese Ghoul’s resident tank, MayBe, used Diggie to straight up counter Silvanna. Diggie’s ultimate, Time Journey, can free allies locked up by Imperial Justice easily as it removes crowd control effects from allies and himself for a duration.

Just this one skill alone made Silvanna much less effective, which gave an opening for the team to retaliate once her ultimate was cancelled.