Ranking all World Championship skins in League of Legends

Which is your favorite? 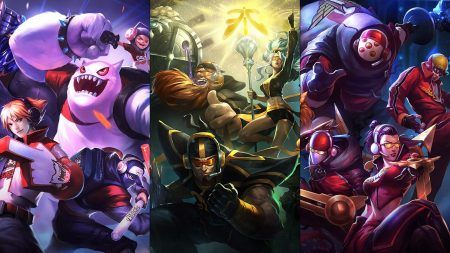 Every year, Riot makes a set of commemorative skins for the team that wins Worlds.

Fans can purchase the World Championship skins in-game every year following their release. The skins are only available for a limited time but previous years’ skins become available for purchase again during Worlds.

Which team had the best championship skin? We’ve looked back at eleven years worth of skins and evaluated each one based on overall concept, graphics, animations, and creativity to determine the definitive ranking of every League of Legends Worlds skin.

For T1’s second world championship, they opted for a pretty simple and straightforward design for Alistar, Azir, Elise, Kalista, Renekton, and Ryze. The champions are dressed in the team’s blue and white LCK uniforms, with matching red headphones that resemble SKT’s winged logo.

Lee “Faker” Sang-hyeok’s Ryze is probably the best skin among the six, as it features his signature Worlds 2015 roll on the recall animation.

Upon its initial reveal, these skins received a harsh backlash from the LoL community. Summoners complained about how bland this particular line up was, with almost little to no details that represent the Korean team.

Another fairly understated Worlds skin, with Rengar, Singed, Talon, Thresh, and Twitch dressed in blue and white casual clothing that represent SSW. While we like the streetwear concept, they’re all dressed in identical white sneakers, which makes the uniform look a little bland.

The team’s logo can be found on each champions’ weapons like in Thresh’s hook and Twitch’s Chem Crossbow.

The best skin of this bunch is probably Heo “PawN” Won-seok’s Talon, as his blades have glowing particle effects.

Our favorite feature is Jax’s stave, which resembles the Summoner’s Cup.

The team logo is prominently displayed on each champion, and we’re particularly keen on Janna’s skin, which holds a cool staff with a humongous glowing Fnatic emblem on top.

There’s definitely a power ranger aesthetic going on here with a unified look and matching helmets for the entire team. Some nice additional details include the team’s logo appearing inside the recall circle animation.

Despite fan anticipation for a Nautilus skin, Kim “Doinb” Tae-sang chose Malphite for his skin as a tribute to his supportive wife.

iG’s calm and collected exterior is reflected among these six black and white championship skins for Camille, Fiora, Irelia, Kai’Sa, LeBlanc, and Rakan.

The monochromatic look is clean without being boring thanks to lots of feathered details that bring to mind a fallen angel aesthetic.

“This skin motivates people because Fiora’s ulti is very difficult to use. But if you hit all the vitals, a massive iG logo appears. This can only be done by people who are good at the game,” said TheShy.

Taipei Assassins’ championship skins feature Mundo, Ezreal, Orianna, Nunu, and Shen and despite being eight years old still boast one of the best concepts we’ve seen so far. The team’s branding really shines through, with Nunu’s skin even taking up the face of the team’s mascot.

Samsung Galaxy chose Ezreal, Gnar, Jarvan IV, Rakan, Taliyah, and Xayah for their 2017 skins, and based the concept on traditional Korean culture.

“Back then our concept was based on the Choson Dynasty. We wanted to make the champions with that traditional Korean style,” explained support Jo “CoreJJ” Yong-in.

There’s a ton of detail in these skins. For example, Xayah’s flower is the Korean national flower and Rakan’s recall hat is a traditional Korean hat for passing government tests.

The level of detail, the unique winter theme, and the subtle without being too flashy glowing details, make these skins the second-best of all time.

The Worlds 2021 champions Edward Gaming splash art is hands down the best out of all World Championship skins.

EDG’s skins consist of champions Zoe, Graves, Aphelios, Viego, and Yuumi dressed in intricate pieces of armor that come in black, silver, and midnight blue hues. At a glance, the splash art looks straight out of a Final Fantasy poster, with Viego giving off serious Sephiroth vibes.

Riot did a flawless job on Yuumi’s design, having the magical cat blend in with other human-looking champions. The EDG Yuumi skin was actually based on support player Tian “Meiko” Ye’s pet cat, which has the same large, light blue eyes.

The skin spotlight for the EDG 2022 skins still hasn’t been released but a fans have already made up their mind about spending their RPs just based on this splash art alone.

After years of designing championship skins for teams and players, Riot Games has finally nailed both skin designs and in-game effects in DAMWON Gaming’s set.

The team’s 2020 World Championship skins plainly scream DWG KIA with their teal, light blue, and silver colors. When used in-game, each skin shows off the org’s signature bracket-like logo — in Nidalee’s Bushwhack, in Jhin’s Whisper, and a large one in Twisted Fate’s ultimate ability, Destiny.

We’re absolutely in love with the Kennen skin, which gives the yordle an electrifying look and transforms his ultimate, Slicing Maelstrom, into a giant DWG KIA storm. The skin’s recall animation shows the champion’s cute side, with Kennen taking a nap while hugging a stuffed toy.

The team’s support player, Cho “BeryL” Geon-hee, particularly requested for his anime waifu to be integrated into his Leona skin and to be “as close as possible” to the image and likeness of Princess Connect: Re Dive’s Sasaki Saren according to a tweet by Ashley Kang.

Each champion has been transformed in a stunning red and gold color scheme with unique animations and elaborate details.

We also love the recall animations, which all feature the player’s signature, the team logo, and a unique animation.

It’s also worth noting that this is the only Worlds skin line that comes with a special ward skin honoring the team’s legendary ex-coach, Kim “kkOma” Jeong-gyun.