In-game AND on Netflix? How awesome is that! 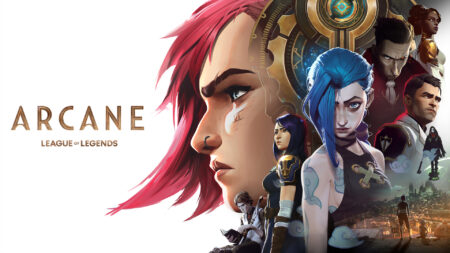 Riot Games’ first ever full length animated series “Arcane”, centered on the backstories of League of Legends champions Jinx and Vi, dropped on November 7, 2022 on Netflix.

In less than a week, it broke records around the globe. Number one in more than 30 countries, Arcane is Netflix’s best rated original series that bested “Squid Game” and “You” on Rotten Tomatoes.

Fans of the MOBA game were especially excited to see Piltover and Zaun come to life, and all the League of Legends champions associated with these two cities, introduced in obvious and not so obvious ways.

Act 1 Episode 1 — Welcome to the Playground

The opening scene of Arcane is painted red. Literally and metaphorically.

Like a scene from The Dark Knight, smoke and heavy shadows prevent viewers from making out what’s happening. All you know is that there’s been bloodshed, violence, and regret to come.

Sisters Vi and Jinx, the main protagonists of Arcane, are the first two League of Legends champions to appear. Two heads taller, Violet establishes herself as the older sister of Powder, which we learn is the name Jinx went by when she was a child.

Who knew the boy who shattered time would look this cute as a kid?

Ekko is first seen in Benzo’s shop fixing the cannon pinion of a grandfather clock, which foreshadows his future abilities to manipulate time. Already wearing a full head of white hair, he’s full of energy and spunk.

This is clearly another of Riot Games’ marketing efforts to get you to buy Chibi Ekko in TFT.

Singed came as a bit of a surprise. It wasn’t until the credits rolled when fans noticed that this champion — voiced by Australian actor and singer Brett Tucker — was mentioned, and put two and two together.

Comparing it with his splash art in-game, you can totally see the resemblance. The sunken cheek bones, pointed nose, and large forehead are key features of Singed.

Now the only question is, when will he become the crazy flinging mad chemist we know so well?

Her long dark blue hair totally gives her away.

Caitlyn is unmistakable, and part of the upper class of Piltover. Maybe that’s why Katie Leung’s posh British accent was the best choice to bring this AD carry to life.

Walking with Jayce in the opening scene of Episode 2, they are having friendly conversation on their way to his lab moments before things got frisky.

Due to the intentional direction of this scene, we hear Jayce’s voice way before we’re able to catch a glimpse of his face.

The camera only pans over Caitlyn and Jayce’s bottom half, and it’s only when the Arcane crystal blew up that we finally see him flung onto the other side of the corridor.

Even though he’s completely dazed, he still looks as handsome as ever.

Yes, we know, he doesn’t have blue skin here, but who else deploys runes, has strange markings all over, and can teleport allies?

Only one League of Legends champion fits the bill, and that’s Ryze.

Not expecting this mage to appear so early on, League of Legends fans are were surprised by this scene, for Ryze isn’t directly affiliated with Piltover or Zuan, but rather “Runeterra” as a whole, as listed in his official biography.

Now that we know he saved young Jayce and his mother, will this debt be one day repaid?

The smallest of champions always make the grandest entrances.

A Yordle who’s barely knee-high, brilliant scientist Heimerdinger is introduced in Act 1 Episode 2 when he visits Jayce in his detention cell. With no hesitation, he starts lecturing the young inventor and instructs him on what to do during the trial.

Treasure these early moments, because this is the last time you’ll see an innocent Viktor.

A bright-eyed intellectual, Viktor decided to take a risk and help Jayce out on his Hextech breakthrough. They bond over science, success, and maybe even a bit of bromance.

League of Legends players however, are much more familiar with his augmented self, and we’re totally dying to see how he evolves over the series.

Act 2 Episode 5 — Everybody Wants To Be My Enemy

What an absolute shocker!

When Caitlyn and Vi enter “the one place all secrets are spilled”, that is, the undercity’s brothel, Caitlyn peeks into various corners along the hallway.

The very first thing she sees on her right are League of Legends champions Lamb and Wolf, collectively known as Kindred, mysterious spirits representing the twin essences of death.

Based on their official biography the “earliest dated appearance of the eternal hunters is from a pair of ancient masks, carved by unknown hands into the gravesites of people long-forgotten”. The masks in this scene clearly bears Kindred’s marks, shape, and color.

Is this pair Kindred before they turned into eternal hunters, or did they temporarily manifest in human form?

Act 2 Episode 6 — When These Walls Come Tumbling Down

What will League of Legends be without Teemo? Nothing.

The cutest crusader in town made an unlikely appearance in this gritty, dark animated series in Arcane Act 2. When Silco and his crew invade Marcus’ house and threaten his daughter in her own room, one of his men is seen flipping through a book.

When the camera zooms in, we see the swift scout depicted in action, alongside paragraphs of illegible words. Even though we thought it was a children’s book at first, the handwritten text could be field notes about the elusive Teemo. After all, he’s really good at camouflaging.

Now that Riot Games has featured their favorite League of Legends champions, poster boys Ryze and Teemo, it’s only a matter of time before Katarina shows up, right?