Which character will you spend Primogems on? 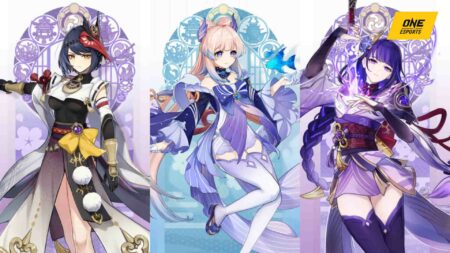 Want to learn more more about the cast of Genshin Impact Inazuma characters in Teyvat? We whipped out this handy guide for you!

The game has come a long way since Kazuha, Ayaka, Sayu, and Yoimiya, the first four Genshin Impact Inazuma characters that the developers initially announced. Since 2021, HoYoverse has been releasing new and exciting characters that hail from the region.

From the Kamisato siblings to Raiden Shogun, here are all the 15 Genshin Impact Inazuma characters and what we know about them so far.

Arataki and his troops frequently parade around the city to provoke general Kujou Sara and the Tenryou Commission. Despite his rebellious antics, he’s become a beloved icon to the children and townspeople.

Gorou, the general of the Sangonomiya troops

Another general on this list of Genshin Impact Inazuma characters is Gorou, the head of the Sangonomiya troops.

Gorou was described by Luohao as “a character that stands his ground in combat and becomes more fierce throughout the battle.”

Kaedehara Kazuha is a five-star exiled samurai who has associations with Beidou’s Crux Fleet.

Kazuha fled from Inazuma to Liyue to escape the Raiden Shogun’s Vision Hunt Decree, an order that seizes all visions in the Electro region.

Next on the list of Genshin Impact Inazuma characters is Kamisato Ayaka, a five-star Cryo character and the eldest daughter of the Kamisato Clan, a renowned clan in Inazuma city.

Out of all the Genshin Impact Inazuma characters, Kamisato Ayaka is the last closed-beta character released in the game.

Ayato is the older brother of Ayaka who acts as the current head of the Kamisato Clan.

The Hydro swordsman also takes on the role of Yashiro Commissioner. He’s in charge of managing shrines, cultural events, and festivals in Inazuma.

When he’s off-duty, you’re bound to see him wind down with a cup of boba tea with Thoma.

Kujou Sara, the general of the Tenryou commission

Kujou Sara is the general of the Tenryou commission, the executive arm of the Raiden Shogun. She is very loyal to the Electro Archon, and is in charge of leading Baal’s Vision Hunt Decree.

Previously a shrine maiden, Kuki Shinobu is the brains behind the rowdy Arataki Gang.

As the gang’s deputy leader, she helps keeps Arataki and his members on the right side of the law. Kuki has also been expanding the business scope of the group out of their usual childish pranks and antics.

Also known as the Electro Archon and the Raiden Shogun (God of Eternity), a huge part of the Inazuma update will center on Baal and her pursuit for eternity.

Raiden Shogun appeared at the end of the Inazuma livestream, pulling out a sword from her chest, leaving fans with the mysterious words, “You will be inlaid upon this statue.”

Sayu is a four-star ninja character who wields an Anemo Vision and a giant claymore that’s bigger than herself. The inspiration behind Sayu’s costume design is a tanuki, or Japanese raccoon dog.

Sayu’s passive ability lets players sneak up on animals without startling them. Aside from her passive, players enjoy interacting with her because she’s voiced by none other than beloved OfflineTV star, LilyPichu.

Sangonomiya Kokomi, the brains of the forces

Shinkanoin Heizou is the number one detective of the Tenryou Commission. He’s known for being meticulous and doing everything in his power to solve a case.

Aside from finding clues and catching criminals, Heizou excels in melee combat and utilizes the Anemo element to send opponents flying with a gust of air.

Thoma is the chief retainer of the Kamisato clan. He has close ties with Kamisato Ayaka, and even appears in her character teaser video.

Thoma was described as observant and mature by the game’s Head of Creative Concept and Writing Team, Xiao Luohao during the Inazuma livestream.

Thoma is also one of the first faces you’ll see upon landing in Teyvat’s new region, Inazuma.

Wanderer, the anti-hero with no affinity

We first got a good look (and a few interactions) of Wanderer, formerly known as Scaramouche, during Fischl’s Unreconciled Stars event, where he introduced himself as a vagrant from Inazuma while wearing a giant red hat.

Considering Wanderer’s politeness and calmness, who would have known that he was the Sixth of the Eleven Fatui Harbingers of Teyvat, who was unveiled with the help of Mona’s powers?

Towards the end of the event, the Fatui members showed players his true colors, revealing a pair of yandere eyes as he scolded his Fatui servants.

The cunning Catalyst user has since gone through a redemption arc during the second Sumeru Archon quest. After cutting ties with the Fatui, he adopted the name “Wanderer” since he has no home, no kin, and no destination.

Yae Miko is the Guuji of the Grand Narukami Shrine. Guuji is the Japanese term for chief priest.

Yae Miko is an unpredictable lady who likes doing things in her own way as revealed in the Inazuma livestream.

Honkai Impact 3rd fans will notice the huge resemblance between Yae Miko and Yae Sakura, for they’re both shrine maidens in HoYoverse.

Yoimiya, the Queen of the Summer Festival

Known as the “Queen of the Summer Festival,” Yoimiya excels in creating fireworks that symbolize people’s hopes and dreams.

Yoimiya is often compared to Mondstadt’s outrider, Amber, because of their similarity in element and weapon.