Get to know her on a first-name basis. 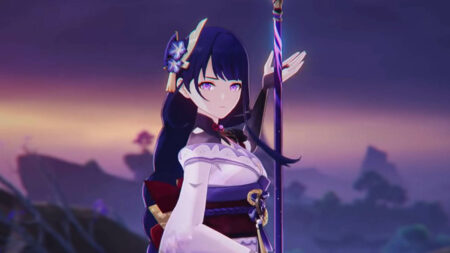 Let’s face it, the Raiden Shogun has too many names.

If you’ve completed the handful of quests that feature the Inazuma 5-star character, you’ll know that her name changes with every social group.

To help you out, here’s a complete guide to the names of Ei Raiden Shogun Baal in Genshin Impact.

A brief background on Ei Raiden Shogun Baal and her names

Raiden Shogun, originally named Ei, is the current vessel of the Electro Archon and the exalted ruler of the Inazuma Shogunate.

She became the nation’s leader after the death of the previous Shogun, her twin sister Makoto, 500 years ago during the cataclysm.

Much of the confusion lies in those two names, Ei and Raiden Shogun. Ei is the character’s true identity, while Raiden Shogun is the title given to her as the ruler of the Inazuma. In the same vein, Makoto was previously called Raiden Makoto during her reign. You can also hear other characters refer to Ei as Raiden Ei.

As twin siblings, Ei and Makoto both have Archon names, Beelzebul and Baal respectively. Since only there can only be one Electro Archon in The Seven at any point in time, Makoto assumed the position first.

Ei prefers to spend her days meditating in the Plane of Euthymia. With no one to rule over Inazuma during her long meditations, she created a self-aware “puppet” of herself to oversee her Shogun duties.

The most confusing part? The puppet’s name is also Raiden Shogun.

Here are a few quick descriptions of the Ei Raiden Shogun Baal names:

Why do people still call her Baal?

In various conversations and data entries, you’ll still find people referring to Ei (Beelzebul) as Baal, and here’s why.

The people of Inazuma erroneously use Baal because they’re actually unaware that the original Electro Archon (Makoto) perished during the cataclysm.

As for other Archons like Venti and Zhongli, they use the name Baal as an homage to Ei’s original role to Makoto. While Makoto was the head of Inazuma, Ei served under her as the kagemusha, or body double.

With all that’s been said, we do believe that the best and most accurate names to use for the Electro goddess are either Ei or Raiden Shogun.

If you’d like to get Raiden Shogun for your party, you can wish for her on the Reign of Serenity banner rerun until March 29.

READ MORE: 5 reasons why you should absolutely blow all your primogems on Raiden Shogun