The complete beginner’s guide to playing mage in MLBB

All you see is magic and victory. 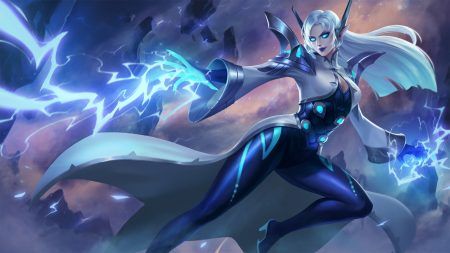 If you’re just starting out in Mobile Legends: Bang Bang and you’re unsure which hero to play, picking a mage is your best option. This hero class is easy to use and very beginner-friendly.

While the mages’ role across genres may differ, their core characteristic remains the same: Deal burst damage.

The least expensive mage that players can get in the MLBB in-game store is Eudora. Priced at 2,000 Battle Points (compared to the usual 32,000 Battle Points), she’s a great addition to help you get your bearings as you begin your MLBB journey.

Get familiar with your spells

The first thing you’ll notice is that she has three skills, which makes it easier for you to click, as more advanced heroes can have four active skills. It’s important to understand what each of the skills do before using a hero.

Under “Heroes” tab at the bottom margin, you’ll find a directory of all MLBB heroes in the game, with explanations and animated examples of how their skills look.

Drawing on the example of Eudora, Superconductor is her passive. This means that it is not an active spell, and will not show up as a button. All heroes have a passive, so be sure to look them up!

Superconductor basically means that once Eudora lands a spell on a target, subsequent spells, which deal Magic Damage, will be amplified.

Her first skill, Forked Lightning, deals area of effect damage in a fan-shaped area in front of her. It also afflicts targets with Superconductor and reduces their Magic Defense. Click on the video in your game client to watch a demonstration of the spell in action.

Her second skill, Electric Arrow, also deals Magic Damage and stuns enemies for a short duration. Most importantly, as you read the description, you’ll notice that it stuns enemies for twice the duration if they have been afflicted by Superconductor.

This means that it’s much more beneficial to cast her first skill before her second.

Lastly, all heroes have an ultimate, their most powerful skill in the game. Eudora’s is called Thunderstruck. It does tons of area of effect Magic Damage, and once again, like Electric Arrow, has an added bonus against enemies afflicted by Superconductor.

As mages are all about the burst, your goal is to deal the most amount of damage in the shortest time possible by casting all your spells. Note that all skills have a cooldown to them, meaning that once you use one, you’ll have to wait a fixed duration before you can use them again.

Typically, mages are designed in a way that rewards players by chaining spells. Eudora’s Superconductor passive for instance, gives players a longer stun duration and more damage when applied. Luo Yi, MLBB’s latest mage, relies on the Yin and Yang of her passive to deal more damage and displace enemy heroes.

As such, it’s important to read a hero’s skill description and understand which combo — the order in which you chain your spells — is best.

Logically, Eudora players would start out with Forked Lightning first to apply Superconductor onto enemies, followed by Electric Arrow to stun them, and finally Thunderstruck. This ensures that stunned up enemies will get hit by her ultimate.

The faster you are at these combos, the more damage you’ll be able to output in an encounter. It also gives enemy players less time to react.

Play your chosen mage hero, then practice chaining their spells one after another. Once you get the order right, you’ll also start getting used to how long it takes before you can restart the full combo after each spell’s cooldown.

As your hero levels up, you’ll gain access to more skills. Only at level four can you unlock your ultimate. At level one, you’ll only be able to put a point into one of Eudora’s three spells.

Because all other spells benefit from Superconductor, Forked Lightning is the obvious choice at level one.

Crowd control is always valuable, and will help you lock up enemies, or put them in their place as you’re running away, so put a point into Electric Arrow at level two.

At level three, you’ll get a choice to put another point into your first or second skill. It differs from hero to hero, and what skills they possess. Based on Eudora’s description, her first skill deals more damage than her second, so it’s more advantageous to increase the power of Forked Lightning.

Of course, as your ultimate is your strongest spell, pump points into it whenever it is available.

Know the range of your spells and how much they cost

Skills in Mobile Legends each have their own predisposed range. It’s especially crucial for mage players to know how far your spells go because you’re entirely dependent on them.

If you cast a spell but enemies were not in range, you would have wasted mana and whiffed all your damage. It also completely messes up your combo and renders you ineffective in those moments, which could get you killed.

Knowing the range of each spell also helps you position better. Mages are usually long-ranged, and want to keep their distance from enemy heroes. They do not have high health, so if you walk too near assassins, fighters and marksmen, you can get taken down easily.

When you’re comfortable judge of the range of each spell, you can then move towards or away enemies while still dishing out maximum damage.

Cecilion’s first skill, Bat Impact, deals more damage at the end of its range. In the clip above, you’ll notice that his other two spells have a different range, so moving and casting your spells is important. Use the range indicators to help you at all times!

Remember to also check how much mana each skill costs, especially at the early levels. Mana management is in itself a technique, for if you spend all your mana casting spells to clear minion waves, it gives enemies an opening to jump onto you.

If you do not have enough mana to cast a spell, a blue indicator with a lightning bolt will be reflected on the skill.

Mages deal early game damage and create early pressure onto enemy heroes. They do not scale as well with items compared to marksmen, long range Physical Damage carries who rely on a combination of primarily auto attacks and skills.

This means that mages’ damage does not increase exponentially the longer the game goes on. The moment you complete all equipment, that is the maximum burst you’ll be able to produce. You peak at the early to mid game, and prefer mid as your go-to lane.

Compared to other lanes, mid lane runs straight down, and therefore is the shortest distance wise. Since mages do not have high health, and some even low mobility, it is safer for mages to stay mid, as you’ll be able to retreat to turret range conveniently.

When it comes to target selection, your primary goal is to burst down the enemy marksmen because they pose the greatest threat to your team. If they move out of position in a team fight, especially in the late game, it’s your job to catch them with your spells.

Most mages possess crowd control, so don’t hesitate to use your crowd control spell when you see an opportunity to. It could lock up enemies and catch them out of position, allowing your team to collapse on them.

As you’re going to rely on your marksmen to carry later in the game, you also have the option of peeling for them like a support. Enemy heroes will likely jump onto your marksman in fights, and you have the ability to displace, slow, stun, knock them up and so on. Your damage here won’t nuke them, but rather, ensure your marksman survives as you lower enemy health bars as much as possible.

Be sure to start out with beginner-friendly mages like Eudroa, Gord and Aurora before taking on more advanced magicians.