She tags enemy heroes with light and dark marks that trigger additional damage. 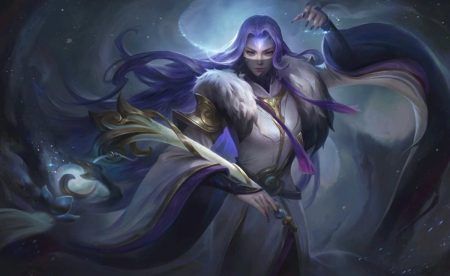 As part of the annual 515 celebrations, MLBB’s newest mage hero, Luo Yi, was given to all players who logged into the game on May 16.

The most interesting part of her kit is her ultimate, Diversion. Different from Arrival, it teleports all allies within the circle to a location of her choosing.

You can even use it to save your Base and the game.

A Yin Yang Geomancer, Luo Yi is surprisingly balanced and easy to play, but hard to master.

Luo Yi’s skills create marks of Yin and Yang on the battlefield, each lasting up to 6 seconds.

Yin-Yang reaction happens whenever two mark bearers of opposite marks come close to each other, causing 540 (+14*Hero Level) (+140% Total Magic Power) Magic Damage and stunning for 1 second. Each time Luo Yi applies a new mark to a mark bearer, she gains 300 (+10*Hero Level) (+120% Total Magic Power) shield (capped at 3 stacks) and 30% of movement speed (decays rapidly in 2s). Shift the state of the skill upon skill cast.

Luo Yi casts the energy of Yin/Yang in a designated direction, dispersing upon the first hit and dealing 230 / 270 / 310 / 350 / 430 (+100% Total Magic Power) Magic Damage to the target and enemies behind in a fan-shaped area, and applying Mark of Yin/Yang to enemy heroes hit.

Passive: Cooldown of all Luo Yi’s skills reduced by 2%.

Active: Luo Yi creates a teleport circle around herself. After 3 seconds, she sends any allied heroes in the circle to another location on the battlefield. The teleport range increases with skill level.

Luo Yi can be played as a damage-dealing mage or support so Magic, Mage, or Support emblem sets all serve her well. As her main damage relies on combos, cooldown reduction benefits her greatly.

At the early levels, your full combo won’t be able to finish enemies off, so Flameshot helps with adding extra damage. Alternatively, being a low health mage who needs to stay at mid range to be effective, and on top of that doesn’t have a guaranteed crowd control, it might be safer to run Flicker.

Though, it still may not save you from death! Assassins like Lancelot who possess abilities that can dodge your spells will halt your Yin/Yang combo.

Even if assassins get stunned for a second, they can still continue to jump on Luo Yi for the kill. Having a tank who knows how to peel for her is paramount against divers.

A mage who doesn’t do upfront burst damage, run Glowing Wand to ensure every spell counts. The extra mana, movement speed, and magic lifesteal from Ice Queen Wand will also come in handy during combat.

To really take advantage of Luo Yi’s trademark, Diversion, it is highly recommended that you play and communicate with friends together in a team to impact the map, for it is difficult to maximize this skill when playing alone.

Manipulating Yin Yang, triggering Duality consistently and working around her AoE spells are the true marks of a good Luo Yi player.

READ MORE: 5 tips to play Atlas like a pro from Resurgence captain Kayzeepi