Will T1 remain the kings of LCK? 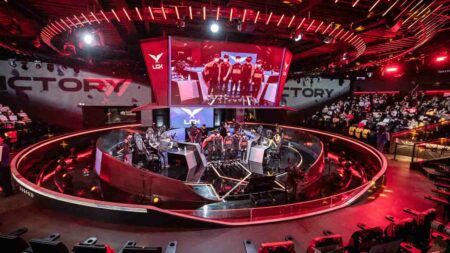 Following a busy 2021-2022 offseason filled with transfers and promotions, the majority of organizations competing in League of Legends Champions Korea (LCK) are sticking to their Spring rosters for the upcoming Summer Split, which starts on June 15.

Teams are looking to go the distance for the final Split of the year to qualify for Worlds 2022. T1, Gen.G, DWG KIA, and ⁠Hanwha Life Esports previously qualified for Worlds 2021, and are favorites to represent the region again.

Here’s the full roster of every LCK team competing in the LCK Summer Split 2022.

While DRX had an early exit in the Spring playoffs, it looks like they’ll be sticking to the same squad for Summer 2022.

DWG KIA is looking to dominate once again in the LCK Summer Split 2022 with the highly-awaited return of top laner Jang “Nuguri” Ha-gwon, who was part of the team’s 2020 World Championship lineup.

The top laner last played for LPL’s FunPlus Phoenix in 2021, and took some time off this Spring. Nuguri reunites with Kim “Canyon” Geon-bu and Heo “ShowMaker” Su to bring back the chemistry that put DWG on the map.

Fredit BRION held their ground in the 2022 Spring Split with a solid 8-10 record, securing their first-ever LCK playoffs appearance.

The risky move turned out to be a big success, as Gen.G went on to finish the Spring Split in 2nd place with a 15-3 record. In the playoffs, Ruler and the crew bested DWG KIA, but eventually fell to the perfect-record T1 squad in the finals.

A squad made up mostly of Challenger and Academy players, HLE struggled to keep up and finished 10th in the LCK Spring Split 2022 with a 3-15 record.

KT Rolster is still finding its footing in the LCK.

The team decided to call up Lee “VicLa” Dae-kwang from the Challengers team to sub for starting mid laner Lee “Aria” Ga-eul. With VicLa showing potential during the season grind, he could be the final piece that inches them closer to a Summer playoffs appearance.

Kwangdong Freecs is looking stronger than ever with Yoo “FATE” Su-hyeok and Park “Teddy” Jin-seong taking control of the team’s mid and bot lanes respectively.

The team put their game face on in the LCK Spring 2022 playoffs, taking down DRX 3-2 in the quarterfinals, but lost to T1 in the next match.

Liiv SANDBOX welcomes the return of bot laner Lee “Prince” Chae-hwan, who previously played for the organization in the 2021 season, who will be playing alongside 18-year-old support Kim “Kael” Jin-hong.

Despite fielding a completely new squad with top-performing players like Gwak “Bdd” Bo-seong and Jang “Ghost” Yong-jun, Nongshim RedForce was not able to find the right team dynamic in the LCK Spring Split 2022.

The team remains unchanged in hopes of having a better performance in the LCK Summer Split 2022.

While T1 wasn’t able to bring home the Mid-Season Invitational (MSI 2022) trophy, the team will be looking forward to Summer and Worlds 2022 qualification.