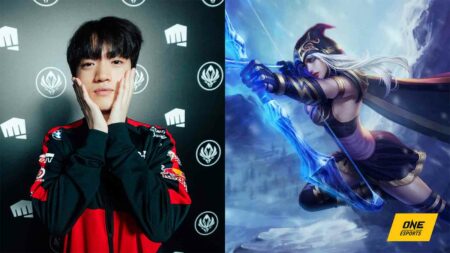 Talented T1 support Ryu “Keria” Min-seok has one of the largest, if not the largest, support champion pools in pro play.

During the MSI 2022 Group Stage and Rumble Stage, he has played 10 different champions in 12 games, including off-meta picks like Bard, and has even put on his carry pants on a buffed Wukong alongside fasting Senna at bot.

Besides showing off stellar performances on his trademark Thresh during the LCK Spring 2022 regular season, he also played 15 other unique champions that range from enchanters and engagers to mages.

Recently, he’s been spotted playing unconventional champions in the support role at bot lane in solo queue, putting in the hours on support Ashe and Zoe.

Keria’s most-played champion in ranked so far in Season 12 is Karma with 70 games, followed by Nautilus (40 games). The latter is also the champion he currently holds the highest win rate on at 68%.

10 days ago, he debuted Zoe support in ranked. The champion was recently buffed in patch 12.8, which MSI 2022 is being played on. Paddle Star’s mana cost was reduced by 10 at all levels, creating greater leeway to poke in lane.

Even though he lost his first two games as Zoe support, he started to see victory a few games later, and is currently sitting on a 50% win rate on her with an average 3.9/5.7/9.6 KDA. Building Everfrost as his Mythic item for more crowd control and running Ignite, he completes Horizon Focus after if the game goes on for long enough.

At the same time, the T1 support has been experimenting with support Ashe. Running Exhaust and Hail of Blades as his keystone, he buys Imperial Mandate as his Mythic item and has opted for either Manamune as his second item or Umbral Glaive, which is now cheaper by 100 gold after the buffs in patch 12.7.

T1 currently has four wins and three losses in the Rumble Stage, losing to G2 Esports, Royal Never Give Up, and Evil Geniuses. With qualification for playoffs at stake, it’s unlikely that Keria will pull out something surprising in the last few games, but one can hope!

T1’s run in the Rumble Stage continues today as they take on G2 Esports in the second round robin. Watch the MSI 2022 matches live on Riot Games’ official channels on Twitch and YouTube.