The 3 best heroes to counter Guinevere in Mobile Legends

No more jumping in and out. 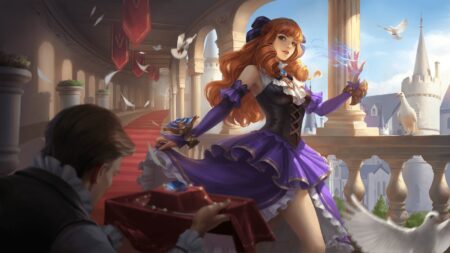 Guinevere is one of the most popular heroes in Mobile Legends: Bang Bang. Usually played in the EXP lane, she is one of the few fighter heroes who excel in the early game, thanks to Spatial Migration and Energy Wave, which deal a lot of damage when used together.

She is capable of snowballing once she gets a few kills in the laning phase. However, she has one glaring weakness — she poses no threat once Spatial Migration missed a target.

If you want to stop her from dominating your games, you have to pick heroes that stops her from executing her full combo.

Guinevere heavily relies on her Spatial Migration-Violet Requiem combo, which allows her to knock an enemy airborne while damaging them for about three seconds.

This will no longer be an issue when you use Helcurt against her. Helcurt’s passive, Race Advantage, silences the enemy who stuns him for 1.5 seconds.

This means that once she jumps on you with Spatial Migration, she won’t be able to follow it up with Violet Requiem. You can easily escape or even fight back using Dark Night Falls and Shadow Transition to silence her for another 1.5 seconds, and Deadly Stinger to finish her off.

You can also use Battle Spell, Petrify, to increase your chances of eliminating Guinevere if you are playing him in the EXP lane.

Considered one of the most versatile assassins, Benedetta is a challenging matchup to the point where you wish you should’ve just banned her in the drafting phase.

Benedetta is a hero who can dash around the battlefield thanks to her passive Swordout Slash, making it hard for Guinevere to hit Energy Wave and Spatial Migration. If by chance she lands Spatial Migration, Benedetta can block it with An Eye For An Eye, and fight back with Alecto: Final Blow.

We all know that Guinevere is vulnerable if she doesn’t have Spatial Migration, so use that to your advantage and engage every time it’s down.

Chou is easily one of the best counters to Guinevere. He can evade most of Ms. Violet’s skills with Jeet Kune Do.

Guinevere will also have a hard time landing her stun thanks to Chou’s Shunpo which renders him immune to all crowd control effects.

If she tries to escape after Spatial Migration, Chou can use Jeet Kune Do again since it has a low cooldown and deal the killing blow with the Way of Dragon. A good Chou player will be able to freestyle his way against an unwary Guinevere, even in the early game.