Steel will lead T1 in the next VCT season. 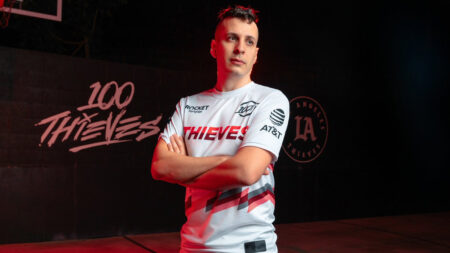 The talented in-game leader transferred over his former team, 100 Thieves, who are reworking their Valorant roster.

The 31-year-old Canadian player had a memorable run with 100 Thieves. He led them to win Riot Games’ North American First Strike tournament, defeating TSM 3-1 in the grand final.

“The main goal is to make sure we make it to next year’s Valorant Champions tournament,” shared Steel. “We are doing everything that needs to be done and trusting the process.”

With his 13-year experience as an esports pro, Steel will lead T1’s Valorant roster as the team’s in-game leader.

“Josh has a really impressive record as an in-game leader,” said T1’s Valorant Head Coach David Denis. “We wanted a really strong leader, a strong voice, and someone who can bring direction to the team.”

Steel will be reunited with former teammate, Tyler “Skadoodle” Latham. The two were part of the infamous iBUYPOWER CS:GO roster that was involved in match-fixing back in 2014.

T1 currently has six players listed on their roster. They have yet to announce which five players will be their starting lineup.

The 2022 VCT season will begin after the best team in the world is crowned at Valorant Champions 2021.