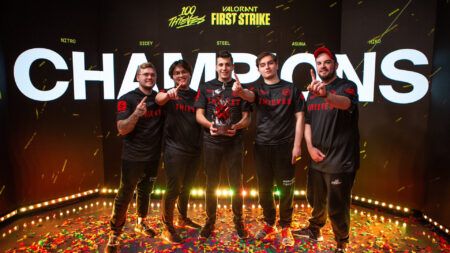 TSM opting for a triple-duelist lineup to start the finals off was to be expected. But in a surprise twist, 100 Thieves decided to run the same lineup with Spencer “Hiko” Martin on Raze, which marks his very first pro game playing Raze.

Later, in a post-game interview, Hiko revealed that he’d wanted to switch to Raze before the match started, because their Split win rate wasn’t great going into the finals.

In game one, TSM got off to a hot start, winning the first four rounds with Taylor “drone” Johnson leading the way on Phoenix. 100 Thieves eventually got themselves into the game, and both teams traded Split attack and defense strategies.

100 Thieves in-game leader (IGL), Joshua “steel” Nissan was instrumental in keeping his team in the game, as he remained composed and waited for his opponents to make mistakes.

The final rounds of Game 1 came down to the wire. 100 Thieves’ Quan “Dicey” Tran defended B-site, dodging TSM’s agents and abilities, which gave his teammates the opportunity to get into defensive positions to win the round.

In the following game on Bind, steel continued to make impact plays on A-site as 100 Thieves’ Cypher player. While, on the attacker side, he controlled Showers and caught TSM players off guard with his lurk plays. Meanwhile, on defense, he shut down entry into U-hall, which gave his rotating teammates enough space to work with during the retakes.

With the game still close, Peter “Asuna” Mazuryk pulled off what might have been the play of the tournament, when he jumped straight into TSM’s entire lineup and dropped a Showstopper ultimate on three enemy agents. What followed was a quick Phantom headshot that gave 100 Thieves the round win and devastated TSM’s economy. 100 Thieves would win Bind with a 13-11 final score.

After TSM won Game Three on Ascent, 100 Thieves’ duelist playmaker, Asuna continued getting high impact kills for his team even when they were on half-buys and eco rounds. This deflated TSM in the following rounds, which snowballed into them losing rounds that went down to the last second.

With 100 Thieves on match point, TSM decided to go for a B-site hit that was stopped by steel with his Cypher abilities, giving valuable information to his teammates. TSM were then stuck outside the B-site, which allowed 100 Thieves to collapse on the remaining enemy agents and seal the deal to win their first major championship.

Following their 3-1 win over TSM, 100 Thieves now sit at the very top of the North American Valorant throne and walk away with US$40,000. As the runner-up of the tournament, TSM earned US$20,000 in prize money.

This concludes the First Strike series tournament, as competitive teams around the world now shift their attention to the Valorant Champions Tour, which is set to begin in late January next year.