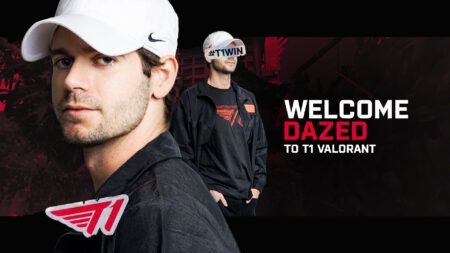 T1 has announced that Sam “DaZeD” Marine is the latest member to join its Valorant squad.

DaZeD started his pro career playing Counter-Strike: Source, then transitioned to CS:GO when the game was released.

It was during this period that DaZeD was notably part of up-and-coming North American CS:GO rosters. But he will, likewise, always be remembered for his involvement in the 2014-2015 match-fixing scandal focused around his then team, iBUYPOWER.

T1 has also confirmed that they have already signed their fifth member, but have yet to announce who it is. Furthermore, Skadoodle has been moved back into the main roster, following his short hiatus from competition during the final Ignition Series events in NA.

It’s possible that Daniel “eeiu” Vucenovic from T1’s Academy squad is the final member of the organization’s main roster. He was previously T1’s stand-in player for the Pop Flash Ignition Series tournament.

After the Ignition Series by Riot, T1 decided to rebuild its Valorant roster by removing Victor “food” Wong and Austin “crashies” Roberts from the lineup. The two were then quickly picked up by Team Envy and could match up against T1, once Riot’s First Strike regional qualifiers begin in the second half of October.

READ MORE: Everything you need to know about Skye, Valorant’s newest agent