100 Thieves Asuna: How to play Chamber like a Valorant pro

Here are three things we learned from Asuna’s Chamber. 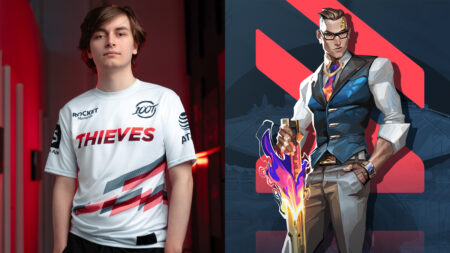 In the video, Asuna shared how players should spend their credits with Chamber, some neat teleporter tricks, and how to escape aim duels just like Jett.

1. How to play like a demon on pistol round

The 19-year-old Valorant fragger advises players to buy four Headhunter bullets and then get half armor to gain a weapon and HP advantage over the enemy team.

Even after missing four Headhunter bullets, he still has a Classic pistol as his backup secondary weapon.

2. Confuse the enemy team with this teleporter trick on Bind

Asuna showed a neat trick by using Chamber’s Rendezvous ability on Bind. While on defense, throw his first anchor point inside U-hall or at the back of A-site.

At the start of the round, go into the teleporter right by A-short. Then throw the second anchor point inside the teleporter. Activating Rendezvous will return Chamber to U-hall, which will confuse the enemy team.

This trick is similar to the plays Yoru makes, but if you are playing with a Sova player who has a Recon Bolt line-up for mid, he can use his Headhunter pistol to wallbang targets outside of the teleporter and then escape by using his Rendezvous.

In the highlight video that 100 Thieves shared, Asuna showed a nifty escape mechanic with Chamber. By having his Rendezvous anchor points ready, he would take a quick aim duel and then teleport away before the enemy team killed him.

This trick is great for escaping sticky situations, like when two enemies peek at the same time, or when they use their agent abilities like an incoming Raze Showstopper which Asuna dodged using Rendezvous.

Chamber’s teleport ability isn’t as easy to use as Jett’s Tailwind dash because it needs to be placed beforehand, but for players who know how to prepare in advance, this ability could save them in rounds.

Chamber was recently released in Valorant patch 3.10 on November 16. He can be unlocked by earning 60,000 XP after activating his agent contract or purchasing him for 1,000 VP.

Here is our own complete Valorant guide on how to play Chamber.