The tournament begins on July 10. The second international Valorant LAN event of the year is almost here. The 12 best teams from around the world will duke it out in Denmark at Masters Copenhagen 2022, where one team will be crowned VCT Stage 2 champions and punch their ticket to Valorant Champions Istanbul.

OpTic Gaming remain the heavy favorites. They are headed to Masters Copenhagen to defend their Masters Reykjavik 2022 title against the top Valorant squads from the VCT Stage 2 Challengers tournaments.

However, leading the charge of the top challengers are LOUD, Paper Rex, Fnatic, and DRX – teams that absolutely dominated their regional VCT Stage 2 Challengers competitions. These teams also have a history of deep tournament runs at previous LAN events, and they’ll be looking to finally lift the trophy.

Finally, teams like XSET, Leviatán, Guild Esports, and Northeption are making their VCT Masters debut in Denmark, hungry to prove themselves on the global stage.

What is VCT Stage 2 Masters Copenhagen?

The tournament marks the culmination of VCT 2022 Stage 2, where teams will get their final chance to earn VCT points that will go toward qualification for Valorant Champions Istanbul at the end of the year.

It is also the first-ever international VCT LAN to host a live audience. For the last three days of the tournament, fans will be allowed into the Forum Copenhagen where the tournament is held. Tickets are now available to buy. 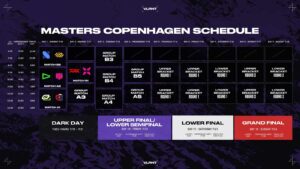 Group A is shaping up to be the group to watch, with two of the Masters Reykjavik finalists in the same group. Guild Esports and KRU Esports will have their work cut out for them if they are hoping to make it out of groups.

Meanwhile, Group B features three teams from Korea, Japan, and APAC. The three Asian rivals will have their eyes set on one another, while EMEA representative FunPlus Phoenix navigates high expectations to perform as the only team from a so-called “major” region.

Teams that are competing at Masters Copenhagen

But unlike in Iceland, it is a LATAM team who will claim one of the playoff berths, while LOUD start in the group stage. Leviatán find themselves in the playoffs instead of LOUD this time, because KRU Esports defeated Brazilian team Ninjas in Pyjamas in the Brazil and LATAM decider.

Out of the eight teams in the group stage, only four will move on to the playoffs.

All teams are competing for a share of the 4,450 circuit points that will go toward qualifying for Valorant Champions at the year’s end. Riot Games has yet to announce the prize pool for the tournament.

The tournament begins with the group stage. Eight teams have been sorted into two groups, and each group will play through a double-elimination bracket. The first two teams from each group to win two matches will advance to the playoffs.

The four teams that emerge from the group stage will be placed randomly in the double-elimination playoffs bracket, where the top-seeded squads from each region will be waiting.

All matches will play out in a best-of-three series, except for the lower bracket final and grand final, which will be best-of-five games.