The 3 best heroes to counter Saber in Mobile Legends

The Wandering Sword is easy to shut down. 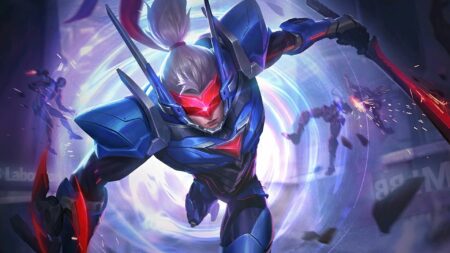 Saber is currently one of the most used assassins in Mobile Legends: Bang Bang.

His easy-to-learn skills and explosive damage can instantly kill any squishy heroes in his path. Having the Wandering Sword on your team can be extremely advantageous.

But what if he ends up getting picked by the opposing team, and you’ll need to find a way to deal with him? Here are three heroes that can withstand Saber, and shut him down effectively.

Saber has been a solid pick in rank ever since he was buffed in the first phase of Project: NEXT. Also, the emergence of War Axe in patch 1.5.88 made him even stronger, as the offensive item synergizes well with his kit.

According to MLBB stats, the Wandering Sword is the 19th most picked hero in ranked play, with a pick rate of 1.68%.

First on our list is the unkillable juggernaut, Argus. The Wandering Sword is best at eliminating enemies with his ultimate, Triple Sweep, something that Argus can mitigate with his own ultimate, Eternal Evil.

Argus is immune to death when he pops his ultimate. Since Saber is vulnerable when Triple Sweep is on cooldown, Argus can finish him off easily with his Demonic Sword and Meteoric Grip combo.

Gatotkaca is a hero we don’t see in the EXP lane often, but he can certainly pack a punch when picked against Saber. Unlike Argus, Gatotkaca is vulnerable to his Triple Sweep, but has potential to counter initiate if he manages to survive.

In that situation, Gatotkaca’s passive, Steel Bones, will be activated. This boosts his basic attack with extra magic damage and lifesteal, which will deal massive damage to his opponent.

Benedetta is another good counter against the Wandering Sword for one sole reason — she can cancel Saber’s ultimate, and stun him at the same time with a well-timed Eye For an Eye.

She also out damages Saber with the right items. However, do take note that it requires a bit of practice to perfectly time Bendetta’s Eye For an Eye to counter his Triple Sweep ultimate.