GOAT-ed: Buying this Samsung Galaxy Ganyu phone should be next on your agenda

“There’s nothing wrong with reaping a reward every now and then.” The 5-star Cryo character, Ganyu, remains a force to be reckoned with in Genshin Impact. The half-human, half-adeptus hybrid is dubbed the strongest DPS in the HoYoverse game with her Cryo AoE elemental skill and burst, the star of almost every freeze comp.

Many travelers have fallen head-over-heels for the legendary cocogoat since her release in 2021. She is known around Liyue as the hardworking secretary to the Liyue Qixing, and dedicates all her work to Rex Lapis.

The limited-edition smartphone features Samsung’s latest model, the Galaxy Z Fold4. It comes with phone cases that showcase the beauty of the Cryo archer. Other accessories include sets of removable stickers, a phone strap, and a phone grip.

It’s the perfect gift for Ganyu mains since it comes in a fancy gift box. Samsung will also release a Genshin edition of its Galaxy Buds2 Pro, which includes a special box, strap, sticker set, and cover.

Ganyu mains will have to wait a bit longer for the official release date of these limited-edition Galaxy Z Fold4 phone and Buds2 Pro Bluetooth earbuds.

It was unveiled during G-Star 2022, a video game exhibition in South Korea, so it’s possible that the Samsung Galaxy Genshin Impact Edition smartphone will be available earlier in South Korea.

Galaxy Z Fold4 with a 512GB storage space currently retails for US$570. Given that the Ganyu-themed phone is a limited-edition release, fans can expect its price to be slightly higher than the original model.

Where to buy Ganyu-themed phone

Travelers can purchase the Ganyu-themed Galaxy Z Fold4 Genshin Impact Edition phone soon at official Samsung stores. HoYoverse has not yet announced whether the phone will be available internationally or if it will be another Korea or China-exclusive, similar to the game’s previous smartphone collaborations with OnePlus. 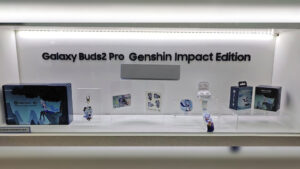 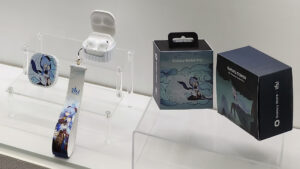 Find out how you can join the official Genshin Impact Discord server, why Elemental Mastery matters, and how to turn your Heizou into a firebender.