We’ve all seen some stunning cosplays with prop swords and bows that wouldn’t hurt a fly, but what if your weapon could actually dish out real damage?

YouTuber Bobby Duke Arts — known for crafting various art pieces from pre-existing items — took up the challenge and tried to create a fully-functioning Thundering Pulse bow as part of his Ganyu cosplay.

To start off, the craftsman modified his childhood compound bow to fit his initial blueprints for the 5-star Genshin Impact weapon. This meant that he had to remove the bow-mounted quiver and the stabilizer to make room for all the cosmetic pieces.

Bobby used a combination of Spanish Cedar boards and urethane resin to create the Thundering Pulse bow’s cosmetic pieces. But instead of simply dying the resin purple, he decided to spray paint the pieces once they hardened to get the proper ombre coloring.

To make the weapon as close to the in-game version as possible, the YouTuber even added LED strip lights and a battery pack to give it a nice and bright glow as you fire shots.

Once the weapon was fully assembled, Bobby’s final test was the archery range. Despite initial worries that the pieces would immediately fall after one pull, the Ganyu cosplayer was able to get three shots off — a resounding success in his books. 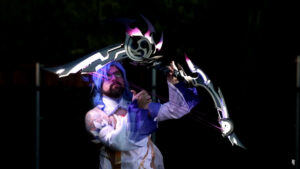 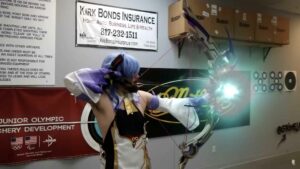 You can check out the entire process down below: