Why does Raiden Shogun have a Mid-Atlantic accent? The English voice actor explains

The tita of InazuManila has spoken. 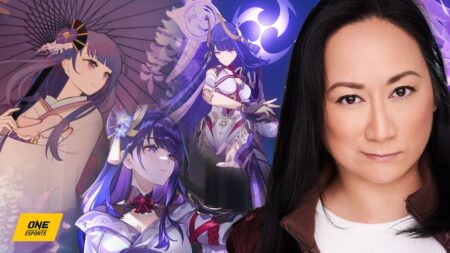 “Now, you shall perish!”

These are just some of the most iconic lines delivered by Anne Yatco, the Raiden Shogun English VA in Genshin Impact.

Anne Yatco had to voice three different personas in the story quest: the Raiden Shogun, Ei, and Raiden Makoto.

The Raiden Shogun, originally named Ei, is the vessel of the Electro Archon, the exalted ruler of the Inazuma Shogunate. She became the nation’s leader after the death of the previous Shogun, her twin sister Makoto, 500 years ago during the cataclysm.

During her community stage appearance at CONQuest Festival 2022 held over the 23-24 July weekend in Manila, Philippines, Anne discussed how she approached Raiden Shogun’s “puppet,” the character’s true self, and her deceased sister.

She painted a picture for the audience where, on a spectrum, the Raiden Shogun and Makoto were two extreme opposites, and Ei would be somewhere in the middle of them.

She described the Raiden Shogun as someone who’s cold, regal, authoritative, and hard.

“I kinda did a very, very relaxed, Mid-Atlantic accent cause that felt regal without being British,” she explained. “I was threading that line of being very cold and detached, but not robotic.”

When it came down to Ei, she softened the accent and added warmth to her manner of speaking to show that the character has more personality and life to her.

“She’s a little bit more conversational, she feels a bit more casual, especially with the way she addresses the Traveler,” she said. “Ei, she’s naive. She has a lot of naivety to her cause she’s been shut away for 500 years.”

Meanwhile, Makoto has the warmest personality, the wisest, and the most motherly among the three.

Anne loves playing as the Raiden Shogun not just in voice acting, but in the game as well. She has completely maxed out the character’s constellation, upgrades that improve a character’s set of talents.

With her C6 Raiden Shogun in her party, she achieved a perfect Spiral Abyss run in June with zero deaths and all floors cleared.

Aside from the Inazuma Archon, she also voices Nobara Kugisaki in the English dub of the anime series Jujutsu Kaisen.