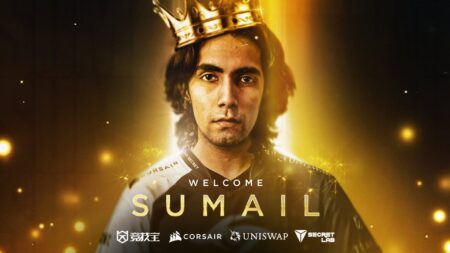 Team Secret has announced their completed Dota 2 roster and who better to play mid for the team than the king himself, Syed Sumail “SumaiL” Hassan.

SumaiL has spent most of his professional career with Evil Geniuses, where he won TI5. Since then he has played with OG Esports, Quincy Crew, and now for the first time ever, Team Secret.

With SumaiL, has Team Secret has won the Dota 2 2022 DPC roster shuffle?

After The International ends, Valve releases all restrictions on teams, allowing them to rebuild their rosters however they see fit. Teams are on a time limit to lock in their roster by November 21.

If a team makes any changes after a roster is locked in, they will suffer a penalty for all DPC points earned. That’s why the post-TI season is a hectic time full of roster shuffles.

Team Secret placed third at The International 10 and is the highest placing team to make roster changes. Despite an impressive placing the team released Lasse Aukusti “MATUMBAMAN” Urpalainen and Ludwig “zai” Wåhlberg from the squad while moving Michał “Nisha” Jankowski to the carry role.

Team Secret added Daryl Koh “iceiceice” Pei Xiang as the new offlaner and completed their roster with SumaiL as the midlaner. It all adds up to one of the most impressive rosters of all time.

Team Secret is one of the invited teams for the Western Europe Division I of the first Dota 2 tour. Fans won’t have to wait long to see how the new roster performs against the best teams in Europe.

Dota 2 fans can find the full announcement on Team Secret’s website, including an impressive quote by SumaiL.

READ MORE: For the first time in 9 years, Resolut1on will take a break from Dota 2