The 10 best shonen anime to watch with your nakamas

Edge of your seat. 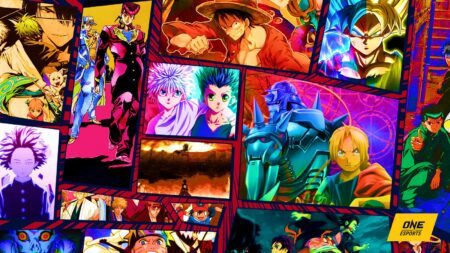 Many of them have become international bestsellers. Though its genre implies that it is targeted at young teenage boys, they have near-universal appeal in a world.

If you aren’t a shonen fan, there’s no better time to dive in. Get ready for blood-pumping action, and stay at the edge of your seat. Here are the best shonen animes to watch whenever you need a pick-me-up in a world far, far away.

More than 1,000 episodes and 20 years later, One Piece remains a classic for good reason. It is epic, with a world teeming with life—and like our own oceans, who knows how much there’s left to discover?

Monkey D. Luffy accidentally eats the Gum-Gum Fruit, imbuing his body with the qualities of rubber. With his new-found powers, he sets off on the adventure of a lifetime, recruiting staunch allies and exploring exotics with all manners of creatures, cultures, and characters.

While some episodes might feel dragged out, as a whole, there’s nothing quite like Luffy’s quest to find One Piece, and his fellow crewmates that find themselves flying the flag of the Straw Hat Pirates. Its worldbuilding is second-to-none.

For those who like: Strong characterization, breathless and airtight story

Fullmetal Alchemist Brotherhood packs so much into 64 episodes that it feels like you’ve travelled around the world and back on a high-octane roller coaster.

Brothers Edward and Alphonse Elric are two alchemists looking to reclaim their bodies after they committed alchemy’s greatest sin: human transmutation. Hearing of the Philosopher’s Stone mythical powers, the duo try their best to get their hands on one—only to uncover a sinister plot that threatens everything they’ve ever known.

While FMA:B has undoubtedly one of the best stories ever put to screen, the true beating heart of the series are its characters. Even bit-part characters are memorable, because they often have their own goals, motivations, and time to shine.

Bones went all out with the animation, with several iconic moments involving the alchemical arts. These include producing some of the finest openings and endings in any anime series.

For those who like: Stellar hard magic system (Nen), epic fights

Do you like your anime powers to have mathematical equations? Then, Nen just might be the power system for you.

Hunters in this world are some of the world’s best adventurers, often tasked to hunt treasures, creatures, and people. 11-year-old Gon Freecs, whose father is a Hunter and thus noticeably absent from his life, aspires to be a Hunter.

While shonen fans won’t be strangers to the plot armor that all protagonists enjoy, often pulling out new powers and forms out of nowhere, Hunter x Hunter’s Nen system is an extraordinarily clever way to power the show and its characters. Every move in the show is informed by Nen, and every character is bound by its rules. Don’t follow the rules? A heavy toll will be exacted.

Besides incredible battles, Hunter x Hunter’s world is expansive and worth diving into. No matter where you go, interesting characters inhabit the world—and arguably some of anime’s most popular villains.

For those who like: The ultimate rule of cool, back-and-forth gotchas

Whether it’s the fights or the fashion, practicality often takes a backseat to “whatever looks the coolest on screen”. But that doesn’t mean it lacks substance.

At its core, it’s a story that starts from the Joestar family, where their fates are intertwined with the ultimate, stylish foe—Dio Brando.

While ostensibly a supernatural shonen, each arc takes on a very different flavor thanks to its rotating main character. Diamond is Unbreakable takes on a mystery vibe, while Golden Wind has a crime drama aspect weaved through it.

Even for a battle shonen, JoJo’s fights happen frequently and relentlessly. But each fight is made special by constant exploitation of strengths and weaknesses in the characters, powers, and environment. There’s never a fight that’s just hand waved away as one being stronger than the other.

Instead, there’s always a satisfying conclusion awaiting each fight, with constant back-and-forths to keep viewers on their toes.

The first Phantom Blood arc might be a little hard to get through, but it is the origin story—and the payoff is so, so worth it.

Dragon Ball is the godfather of the modern shonen, and has inspired several series. But even now, few can rival the OG in terms of its hype and spectacular power-ups.

Dragon Ball and its sequel focuses on Goku, in an origin story amalgamated from the mythical Sun Wukong and Superman. He’s a Saiyan, an endangered bloodthirsty warrior race, but has since dedicated himself to protecting the Earth and the universe, becoming its strongest warrior.

One of Dragon Ball’s greatest strengths are its villains. Every one that appears on-screen is attractive, drips with menace, and presents a chilling counterpart to Goku’s relentless optimism. The older animation might not hold up as well in the present day—but nothing can beat a good story, and a good shout of KAMEKAMEHA!

For those who like: A dose of tragedy to go with their action

Attack on Titan enters this list as a newer GOATed series that relishes in tragedy, deception, and superpowered giants called Titans.

The story follows a a trio of friends, Eren, Armin, and Mikasa, who experience a sudden Titan invasion in their hometown of Shiganshina. Losing their home and their loved ones to these towering creatures, they decide to sign up for the Survey Corps, a military branch dedicated to fighting off the Titans.

While the world feels closed off inside the walled cities, the series has an excellent pace of storytelling. Every season shares insightful stories from Eren’s posse that eventually reveal the mind-blowing origin of the Titans.

Set in a quasi-historical Edo era (think semi-ancient Japan), Gintama follows the trials and tribulations of Gintoki Sakata, who earns a living as a sellsword after Earth is defeated by aliens.

Doing odd jobs to make a living, he gathers staunch allies and friends, and also engage in numerous gags with them.

While best known for its parodies, Gintama sustains itself on the strength of its characters and their comedy, all of whom we learn more about as Gintama doubles and triples down on its absurdity.

Still, don’t expect only tears of happiness—the show doesn’t pull its punches when aimed at your gut, whether it’s to make you laugh or cry.

If you are wondering who to thank for anime and manga’s obsession with tournament arcs, Yu Yu Hakusho’s groundbreaking example is one of the genre’s finest.

Yu Yu Hakusho follows Yusuku Urameshi, a delinquent whose final act in life is unexpectedly saving a little girl from a car accident. Given a chance to return to life, he takes on the role as the Spirit Detective, investigating supernatural activity within Earth.

The series is known for its darker tone, especially compared to the shonens of its time, and has no qualms diving into body horror to showcase its themes of corruption and power. But the show is most famous for the Dark Tournament arc, where character development, action, and emotions combine for one of the best stories shonen can offer.

For those who like: Polish, every frame a painting

Demon Slayer’s popularity explosion might be due to just how easy it is to get into. The premise is cookie-cutter, but there’s a lot to love with the show’s twists, turns, and the beautiful characters that inhabit its world.

Tanjiro Kamado is one of two survivors after his family was attacked by demons—but he was the only one left unscathed. His sister, Nezuko, was turned into a demon, though manages to show restraint and human emotions.

In an effort to protect his sister and avenge his family, Tanjiro strives to become part of the Demon Slayers Corps, a secret organization waging war against the supernatural demons.

While Demon Slayer takes a lot from its predecessors, it hones everything to an edge fine enough to chop off a demon’s head.

Even if you’ve read the manga, the anime is well worth a watch. Producers Ufotable brought their A-game to the series. The studio, known for their cinematic, sweeping cameras and stellar animation, spared no effort in making Demon Slayer one of the best battle shonens on the market, and likely for years to come.

For those who like: Coming-to-age story, masterful blend of comedy and seriousness

Shigeo Kageyama, nicknamed Mob, is an inconspicuous middle-school boy that hides his emotions behind a stoic mask.

But Mob is actually one of the world’s powerful espers, and his efforts to hide his true self is to prevent himself from unleashing his full powers and going out of control. For a person who doesn’t want any trouble however, trouble tends to find him.

Throughout the series, we follow Mob and his conman master—Reigen Arataka, a self-proclaimed psychic without any actual powers. The contrasting character dynamic is a brilliant way to examine Mob’s childish ideals with his world-ending powers, and Reigen’s cynicism. They are often hilarious, and the chaos only steps up when more interesting and eccentric characters appear.

But Mob Psycho, while funny in many measures, never shies away from heavy topics. It’s a surprisingly mature show that, despite its many gags, never fails to turn every fight or problem into something for its character to learn from.

ONE, who wrote One Punch Man, is a masterful storyteller—and Mob Psycho’s serious yet dreamy tone sets up a coming-of-age story in just 25 episodes that few other shows manage in years.