The manga editor has taste. Shintaro Kawakubo, Attack on Titan editor, spent over a decade working with manga author and illustrator Hajime Isayama, and helped develop the story of Eren Yeager and the residents of Paradis Island.

During an interview with ONE Esports, hosted in collaboration with the Attack on Titan exhibition at the ArtScience Museum at Marina Bay Sands, Kawakubo revealed his favorite characters and titans in the franchise.

Can you guess who he picked? 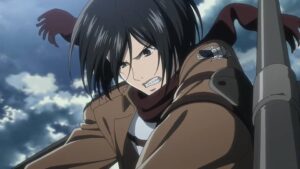 A fan of the series since its inception, Kawakubo listed down three characters that are his all-time favorites: Mikasa Ackerman, Sasha Blouse, and Annie Leonhart.

While Mikasa and Sasha are popular characters from the series, Kawakubo’s pick of Annie is quite surprising, seeing as how she’s an antagonist to Eren and the crew early in the series.

What’s more, Kawakubo mentioned that if he had to pick one out of the three, it would actually be Annie.

“In the anime, she has a voice and you can hear her talk, so that makes me more interested in the character as the story progresses,” explained the Attack on Titan editor.

Kawakubo’s favorite titan has no name

Kawakubo delivers another deep cut with his favorite titan.

Rather than picking one of the nine superpowered titans such as Eren’s Attack Titan, the editor went with one that didn’t have an actual name. With hundreds of nameless giants present in the anime and manga, Kawakubo decided to pull out his phone and identify the titan in a specific manga panel.

The titan appears during the Battle of Trost District arc in the first manga volume, primarily known for eating Mina Carolina, a secondary character from the 104th Training Corps.

When asked why he picked this unknown titan, his answer was quite simple.

“It’s cute and scary at the same time,” commented Kawakubo.

READ MORE: Feel just how big the Colossal Titan is at the Attack on Titan exhibition