The journey of a lifetime. 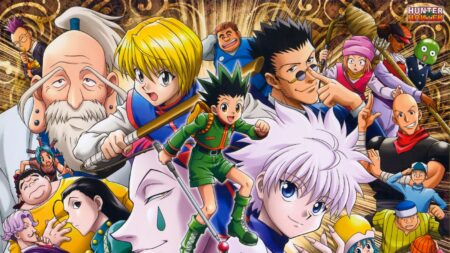 Hunter x Hunter is one of the best stories ever told in anime and manga.

Yoshihiro Togashi’s debilitating health issues, however, have stalled the progression of the story. The manga, already known for its hiatuses, went without an update for nearly four years.

Then, on May 24, an unchanged Twitter handle that looked like a bot posted page number six of what looked to be a draft of Hunter x Hunter. After the One Punch Man artist confirmed the legitimacy of the account, Togahi’s Twitter gained more than one million followers in a day.

There’s a reason why people continue to hold out hope for Yoshihiro Togashi to eventually return and put the bow on the beloved series. And even if you’ve never experienced a single bit of Hunter x Hunter, now is as good a time as any to jump in.

HxH might start off as a stock-standard shonen protagonist story: Gon Freecs, a curious 11-year-old boy, aspires to be a titular Hunter. As we follow Gon along for the ride, however, the journey is an inhumanly exhilarating roller coaster, with more twists hiding behind every turn.

Every place is fantastical, filled with expansive cities and exotic locales. Every person has their own goals, moving around the world to put them into effect. Everything that happens is interconnected in a way so organically woven, that the world feels at once alive and inextricably linked to the characters we follow.

While Gon is ostensibly the main character, the story is never shy about putting him on the sidelines, or when we need more context on the world’s happenings. Or simply because the other characters can be so fun to follow.

We are tourists in the best way — unable to interfere, but able to show appreciation for anything that comes our way.

The characters: Surprising brutality hiding beneath a goofy facade

At first glance, several of Hunter x Hunter’s characters look like they could be from Saturday morning cartoons. Wide-eyed, innocent protagonists, facing off against a litany of ditzy villains with more colors on them than a Twister mat.

But it doesn’t take long for everything to change.

All of them are so distinctive that a silhouette is enough for the average viewer to identify a character. Nearly every character looks like a caricature, but dig just a little deeper, and the complexities fall over to reveal themselves.

Even the simplest of goals (I want to be a Hunter!) hide motivations that border on tragedy. Every person lives their own myriad web of relationships, expertly woven to meet or clash with each other when the stakes are at their highest.

Even the most bit-part characters have roles to play, instead of just being extra dressing on an already-laden salad.

The powers: Over-the-top abilities grounded by an excellent magic system

Every action has an equal and opposite reaction. It’s a fundamental law of physics often ignored in anime, because the rule of cool is always in effect.

The Hunter x Hunter universe manages to keep itself relatively bounded to its own reality through one of fiction’s most established power systems: Nen.

Nen’s rules tie each power to a linked hexagon. Six different power systems exist within it, which determine the type of effect a character’s unique powers can have or don’t have. There’s even a mathematical formula to calculate a person’s power level, a perfect gift for those obsessed with the question of “who would win?”

Knowing the boundaries and limitations of each character makes fights interesting. Watching two gods punch it out is the same thing as watching two peons slap fight, and flashy effects can only do so much to cover that up.

And that doesn’t mean the powers are any less spectacular: they just tend to come with so many drawbacks and costs that they aren’t worth it, except in the most dire of circumstances. What matters is knowing when people choose to go all out — and the inevitable consequences that follow.

Now’s the time to catch up

It’s been almost four years. But we are so close to the brink of greatness.

Yoshihiro Togashi’s magnum opus has been on hiatus for so long, that even slow readers that consistently forget when chapters release (i.e. me) are caught up. Even now, with the hype train on Hunter x Hunter going full steam ahead, there’s probably time for you to jump on, catch up to the station, and board the same carriage.

One of the best parts of following an ongoing series is the healthy discussion that ensues between each break. One example is JoJo’s Bizarre Adventures. For each season that comes out, anime-onlies can react to a fresh episode and discuss theories, while manga readers can check out the speculation, whether funny, accurate, or just tremendous.

Whether you choose to watch the masterpiece anime, or jump onto the manga train with brakes aplenty, Hunter x Hunter is worth it.