T1 Keria: ‘The Worlds 2022 final was where I doubted myself the most’ 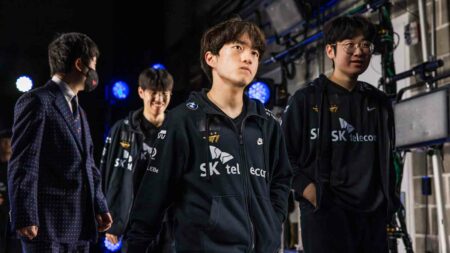 The Worlds 2022 final was a heartbreaking moment for runners-up T1.

T1 had some flashes of brilliance in game five, such as a miracle Baron steal by Lee “Gumayusi” Min-hyeong. But DRX soon took over during a critical Elder Drake fight at 40 minutes.

As DRX crowded around the Drake pit, T1’s carry players teleported into the enemy base for a backdoor attempt, but it was too late. DRX claimed the Elder Drake and successfully defended their base, picking up four kills in the process. They then sieged the enemy base to claim the 3-2 victory and the organization’s first world championship.

The moment of defeat was especially hard for T1 support player Ryu “Keria” Min-seok, who was seen burying his teary-eyed face in his arms right after the hard-fought series.

During the post-match press conference, T1 Keria elaborated on the team’s game five draft and what was going through his mind right after the loss.

T1 breaks down what happened in the game five draft

Head coach Bae “Bengi” Seong-woong believed that they had a lot of flaws concerning their draft. In the fifth game, T1 locked in Varus early on and looked to save the Aatrox pick for the draft’s second phase.

Things turned awry when DRX selected Aatrox as their third pick in the first phase. In response, T1 resorted to drafting Gwen for the top lane. “We simply thought that our answer to Aatrox was enough,” Bengi said, according to Inven Global’s translation.

DRX’s draft also had the surprise pick of Bard. Though the support champion had a low pick rate at the tournament, T1 Keria felt that they could play well against it, which is why they left the champ open.

When asked about what went wrong in the series, Keria replied, “DRX played a lot more best-of-five’s than us so their level of focus in the late game was much better than ours.” The loss against DRX was a hard pill to swallow for the support player. T1 Keria played under the team’s banner in 2018-2020, alongside current members Kim “Deft” Hyuk-kyu and Hong “Pyosik” Chang-hyeon.

Following the series, Keria embraced his former teammates and wept on their shoulders. Keria explained why he got teary-eyed at that moment. “It was a series where I doubted myself the most. I was so frustrated and angry so such emotions came over me,” he said.

Being close friends with Deft, Keria had a few nice words to say about the LoL veteran’s rise to the top.

“I know that Deft went through a lot to win Worlds for a very long time, so I want to congratulate him from the bottom of my heart,” said T1 Keria.

You can check out Inven Global’s full translation of the T1 post-match press conference.