The Yaksha reigns over all. Genshin Impact has finally created a five-star character that has exceeded fans’ expectations on what an S-tier character truly is. With the highly-awaited patch 1.3, players can now get their hands on Xiao, the Vigilant Yaksha.

If you’ve already completed the Rex Lapis story arc in Liyue, you probably already know how cool Xiao is. With his teal-tinged aesthetic and magical Yaksha mask, the Liyue native enters Genshin as the third pole-arm user after Zhongli, and the fourth Anemo character after Venti.

While Diluc has been lauded as the best five-star main DPS since the game’s launch, Xiao steps in as a top contender on what it means to be a flashy DPS in-game.

Xiao is a faster main DPS than other options

As a pole-arm user, his auto-attacks fluidly create strong poking combos. Unlike Xiangling and Zhongli’s pole-arm attack combos, Xiao’s string features a sweeping animation that ends in a sizeable smash. His charge attack is also a short-ranged AoE knock-up that can repel hordes of hilichurls and other enemies.

Xiao’s elemental skill, Lemniscatic Wind Cycling, is a quick dash that deals Anemo damage (455% skill damage at level 10) and acts as a convenient way to reposition yourself in a tough battle. On top of that, you can cast it in the air to avoid any kind of strong attack or projectile.

Xiao’s elemental burst, Bane of All Evil, is by far one of the best bursts in the game. Once he puts the Yaksha mask on, it greatly increases his jumping ability, his attack AoE and attack damage (95.2% damage bonus at level 10), and converts all attack damage to Anemo damage which cannot be overridden by any other elemental fusion.

Unlike Diluc’s static burst Dawn, Bane of All Evil allows you to keep the action going and perform some crazy lunges alongside quick dashes to give you a Devil May Cry-like experience.

Keep in mind that your health will decrease as you use the burst, so make sure you have a quick heal ready when you’re done using it.

Lastly, what makes Xiao a cut above the rest is his element of Anemo. While it is very much a tricky element to deal with in battle, Xiao properly integrates it as an attacking element with his kit.

Anemo provides Swirl damage to Pyro, Hydro, Cryo, and Electro elements and generates even more elemental reactions like Vaporize and Melt along with it. More of a standalone element, you can see how Xiao can easily tear through element-heavy compositions in the Spiral Abyss with the use of the Anemo damage conversion during Bane of All Evil. 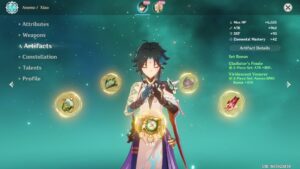 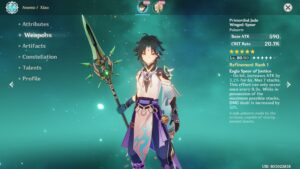 As the main DPS on your party, Xiao’s standard artifacts are 2-piece Viridescent Venerer (Anemo damage +15%) and Gladiator’s Finale (Attack +18%) while his go-to weapon is the five-star Primordial Jade Winged-Spear to provide that foundation in crit rate.

If you’re looking to incorporate more elements into your fights like Fischl’s Oz or Xingqiu’s Raincutter, you can try out 4-piece Viridescent Venerer since it increases Swirl damage by 60% and decreases opponents’ elemental resistance to the element infused in the Swirl by 40% for ten seconds.

In terms of building a party around him, Xiao will be ineffective against any kind of Anemo opponents and will have problems breaking Geo shields like the Stonehide Lawachurl. You can utilize a Claymore user like Beidou or Xinyan to help the Yaksha out on such specific occasions.

To maximize his Anemo nature, you can also add another Anemo user like Jean or Sucrose to get the Impetuous Winds elemental resonance, granting your entire team 15% less stamina consumption, 10% movement speed increase, and 5% decrease in skill cooldowns.

Aside from that, Bane of All Evil will not recharge when active, so the second Anemo character will come in handy in spawning elemental particles to recharge his burst.

With all that’s been said, Xiao ultimately provides a new playing experience compared to other big S-tier names like Diluc or Childe. If you like fast-paced action that doesn’t rely on many elements while repeatedly diving into your opponents’ heads, Xiao is the perfect character for you.

You can wish for Xiao in Genshin Impact’s newest character event wish banner, Invitation to Mundane Life, until February 17.

READ MORE: This is what happens in Genshin Impact’s endgame