PSG.LGD is the final team to qualify for the ONE Esports Singapore Major 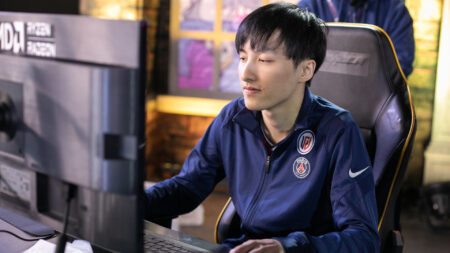 PSG.LGD has become the final team to qualify for the ONE Esports Singapore Major.

PSG.LGD was on an incredible run in the final two weeks of the DPC China upper division, propelling the team to the final spot for the Singapore Major. To earn its spot, PSG.LGD defeated its regional rival Vici Gaming during week five, which also resulted in LGD and Elephant finishing the season with a 4-3 record.

PSG.LGD then completely outclassed Elephant in the tiebreaker match, winning both games convincingly. The win earned PSG.LGD a wild card spot at the Major. LGD will be competing against Team Nigma, Team Liquid, Vici Gaming, T1, and AS Monaco Gambit on March 27 when the Major kicks off with the wild card matches.

PSG.LGD’s chances of qualifying for the Major were slim when the team began with a 1-1 record. The team then lost to Elephant and Invictus Gaming in weeks three and four of the season. However, PSG.LGD rallied together to win their final two matches and caught up to Elephant for the fourth-place spot.

Many organizations in the Chinese Dota 2 region underwent major player changes during the DPC’s offseason period. With that said, PSG.LGD’s roster was slowly disassembled in 2020. First, its legendary players  Xu “fy” Linsen and Lu “Somnus`M” Yao decided to part ways with the organization, with the intention of forming a Chinese superteam of their own.

The most interesting story following PSG.LGD’s resurgence in the Chinese Dota 2 scene revolves around Ame. At the start of 2020, Ame was traded by PSG.LGD for Lai “AhJit” Jay Son from CDEC Gaming. Ame has since helped the team in qualifying for the Major, while his ex-teammates were all eliminated from the qualifiers.