It all adds up. 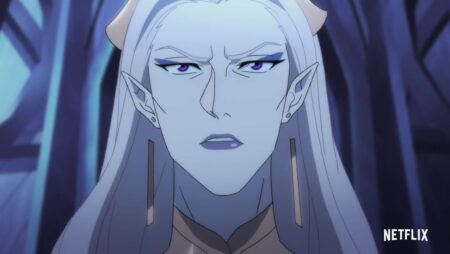 Remember last year when Valve announced it would release multiple heroes throughout 2021? Well, it’s March, the Singapore Major is two weeks away, and Netflix’s Dota: Dragon’s Blood anime is slated for release on March 25th.

It all adds up: what if the anime is actually a teaser for a new Dota 2 hero?

So who will the new hero be? My best guess is Selemene, the Goddess of the Moon, and here’s why.

If you’ve played Luna or Mirana at all, you’ll have heard Selemene’s name mentioned at least once. But until the Dragon’s Blood trailer dropped, we had no idea what the mysterious Goddess actually looked like.

All we knew up until this point was that Selemene is the Goddess of the Moon and that she’s also keeper of the Nightsilver Woods, where she and Mirana watch over Selemene’s sacred glowing lotuses.

Now that the trailer has finally revealed her, it’s easy to picture her as a powerful ranged spell caster like Lina as there are a lot of similarities between the two, design-wise.

Both characters are dressed in a gown, wear no visible armor, have levitation powers, and have powerful magical abilities. Without a doubt, Selemene would be classified an Intelligence hero unlike her subordinates, Luna and Mirana, who are both Agility heroes.

The trailer shows Selemene summoning multiple powerful beams to nuke her foes much like Luna’s ultimate Eclipse and to a lesser extent, Invoker’s Sunstrike. If she was made into a new hero, I could see this being one of her signature abilities.

Based on the lore, the Goddess doesn’t actually descend to the Earth unless the world is in grave danger. Instead, she empowers her loyal followers with lunar energies and lets them settle all conflict in her stead. Knowing this, there’s a good chance Selemene would have some kind of support/utility skills in her kit too.

The show also portrays Selemene with a vibrant pink aura, this aura could be a simple passive in-game that powers up herself and allies during night time.

While I couldn’t piece together what purpose the lotuses serve, they clearly have some kind of sacred power. This could work in-game by having enemies who are damaged by Selemene and any allies influenced by her aura, dropping lotus petals. Collecting enough petals could allow players to summon a lotus to further benefit the team through healing over time.

One thing we do know for sure is that Selemene’s official mount is Axia, the winged lion Immortal from the 2018 Trove Carafe loot box — the item description confirms it. Based on this, I wouldn’t be surprised if the developers added a feline mount to Selemene’s design. We need more cat ladies!

Okay, this is crazy but hear me out

What about if Selemene wasn’t the base hero and, instead, Axia became the new hero, and then her ultimate summons Selemene for a set duration to boost her power temporarily? Think of a modified version of Alchemist’s Chemical Rage or Terrorblade’s Metamorphosis. This would tie into the lore better than having the Goddess being her own hero.

We could be looking at buffs across all skills or temporarily adding additional skills to the base hero’s hotbar for added craziness. Buying an Aghanim’s Scepter would then make the summon last permanently meaning all additional effects become permanent and Selemene stays on the battlefield.

I do hope we get to see the new hero sometime soon. The additional lore that came with Hoodwink’s release last year opened my eyes to how much we don’t know about the Dota 2 universe. Let alone, how much Valve could expand upon it if they chose to.

We have a lot coming up towards the end of March. Us Dota fans will be overwhelmed with a lot of esports, anime and hopefully a brand new hero too. I can’t wait.

READ MORE: This is the full schedule for the ONE Esports Singapore Major