Have you ever seen a Genshin Impact cosplay that’s so shockingly accurate and perfect, that you thought you have been transported to Teyvat for a second?

Chinese Genshin player 小白Nanno had the gaming community do a double take after sharing their impressive Sangonomiya Kokomi cosplay from HoYoverse’s open-world role-playing game. The cosplayer depicted the 5-star Hydro waifu to a T, showing off the character’s in-game form in their photos.

Wow! We can’t take our eyes off of this breathtaking Sangonomiya Kokomi cosplay

Decked in the character’s flowy, off-shoulder dress, 小白Nanno showcased Her Excellency’s cuteness and elegance. They even captured Kokomi’s dazzling, light indigo eyes and her gentle yet stern expression in their cosplay photos.

Showing off their gaming setup, the cosplayer struck a pose beside her monitor which displayed an image of the Hydro catalyst user.

小白Nanno also posted short videos of their cosplay on their Douyin account, giving fans a look at their full costume.

Similar to other Chinese Genshin Impact cosplayers like Lujiuerhei and Weilanran, they have also portrayed several other 5-star and 4-star characters such as Ganyu, Kamisato Ayaka, Keqing, Yae Miko, Yun Jin, Yanfei, and the Raiden Shogun, who was once opposed by Kokomi during the vision hunt decree.

Fans can check out their other cosplays on Douyin. 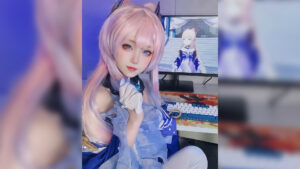 Sangonomiya Kokomi is the leader of the Sangonomiya resistance and serves as a wise and resourceful military advisor in the story. She is also the Divine Priestess of Watatsumi Island, located in the Inazuma region, and serves as the island’s supreme leader.

Kokomi is available in version 3.0’s “Drifting Luminescence” Character Event Wish alongside Xingqiu, Sucrose, and Dori until September 27. If you wish to add her to your party, check out these three easy Genshin Impact rituals you can do to bring her home.

If you already have her in your Genshin party, read our comprehensive guide on the best farming locations and routes for her materials.