“Reveal your true form before me. Release!” Anime fans had it great during the 1990s. It was a golden era for the industry as these legendary classics such as Neon Genesis Evangelion, Hunter x Hunter, Berserk, Ranma 1/2, Yu Yu Hakusho, and Cardcaptor Sakura redefined the anime scene.

Cardcaptor Sakura in particular, was a trendsetter in the magical girl genre, centering on the titular protagonist, Sakura Kinomoto. It grew to become a popular series, especially among 90s and 2000s kids, including anime singer and Japanese model Akase Akari.

She nailed down the anime character’s look with her sweet makeup that made her eyes look bigger, akin to CLAMP’s art style. She also captured Sakura’s messy and layered bob cut, including a few of her ahoge (long locks of hair sticking out of a character’s head).

The photos were stunning, and depicted scenes straight out of the anime, shot at the height of the spring season when cherry blossoms bloomed all throughout Japan. 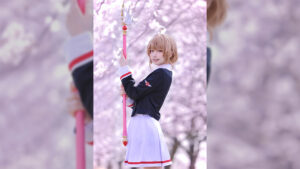 The first season of Cardcaptor Sakura revolved around the adventures of an elementary student named Sakura. This energetic and loveable fourth-grader “accidentally” discovers she has magical powers after unleashing a set of mystical cards around the world known as Clow Cards.

These cards are based on the Tarot cards of the Major Arcana and can be controlled to wield their powers. Sakura must collect all 53 Clow Cards and seal them to prevent a great disaster from befalling the world.

The story follows Sakura as she graduates from elementary school in the Sakura Card Arc, and when she starts middle school in the Clear Card Arc. Anime fans can watch the series on Netflix.