Jujutsu Kaisen 0 post credit scene explained: Is it linked to the anime?

The mystery is starting to unfold. 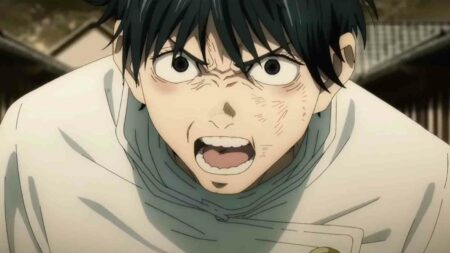 If you’re in the dark cinema right now frantically googling on your phone on whether you should stay for a Jujutsu Kaisen 0 post credit scene, the answer is yes.

The movie contains one post credit scene that references a later manga chapter, teasing season two (or perhaps even season three) of the anime.

With Jujutsu Kaisen 0 hitting cinemas internationally this week in subbed and dubbed versions, the excitement from fans worldwide is running high. The movie debuted in Japan on Christmas Eve, and shattered box office records as the highest-grossing movie in 2021 at US$91M. In Taiwan, it made US$3.5M in just six days.

Warning: Major spoilers if you have yet to watch Jujutsu Kaisen 0 the movie or read Volume 0 of the manga.

What happens in the Jujutsu Kaisen 0 post credit scene?

Before you jump to the Jujutsu Kaisen 0 post credit scene, you’ll first have to listen to King Gnu’s “One Way” during the end credits. Amassing 38 million views on YouTube, it topped Japan’s Billboard Hot 100 charts in January.

It not only sports a catchy tune, but was also commended by Japanese fans for its lyrics, which meaningfully captures the themes of Jujutsu Kaisen 0, such as good versus evil, love and hate, as well as right and wrong.

Once that’s over, you’ll be greeted by… animals.

Zebras. Giraffes. Typical scenes on the savannah that tells you that it is set in Africa.

The Jujutsu Kaisen 0 post credit scene then cuts to a busy area in town where we see Yuta Okkotsu, the movie’s protagonist, and Miguel, the antagonist who fought Satoru Gojo on the Night Parade of a Hundred Demons as part of Suguru’s Geto distraction plan.

Despite what we saw earlier in the movie, they’re friendly with each other, as Yuta sets his sword down to join Miguel at the table for a hearty meal by the roadside. Smiling and chatting, they’re abruptly interrupted by Gojo, who they did not expect to see.

Wearing a light colored casual outfit and trademark sunglasses, his appearance will remind you of the present day Gojo that we see in season one of the anime that takes place one year later, hinting at the timeline this scene is set in.

Yuta Okkotsu may be the protagonist of this movie, but he doesn’t appear in season one of the anime, which was first released in 2020 before its prelude story.

He is however, poignantly mentioned multiple times by second year students, and it’s quickly established that he’s overseas on a mission, a common occurrence for high grade sorcerers. Yuji Itadori and crew therefore, have yet to meet him because he’s been away.

The Jujutsu Kaisen 0 post credit scene marks the first time we see him animated in the current storyline running in the manga. Specifically, it references this panel in chapter 145 after he’s returned to Japan. In this scene, Yuji, Megumi Fushiguro, and Yuki Tsukumo, among others, are trying to figure out how to rescue Gojo, who has been sealed in a box.

Black Rope is mentioned as a tool that can be used to break one of the gates in the prison realm. If you recall in the movie during the fight with Miguel, Gojo reveals his thoughts to the viewers and mentions that the rope disrupts his sorcery technique, but doesn’t divulge any more details.

Unfortunately, according to Megumi, Gojo had gotten rid of all the Black Rope that was previously in existence.

Yuta chimed in, and added that he actually went to Africa to search for more, but to no avail. At this point, readers are also aware that Miguel was recruited by Gojo after the Night Parade of a Hundred Demons, and is now an ally. The Jujutsu Kaisen 0 post credit scene therefore, is a teaser to this flashback.

However, fans may have to wait beyond season two of the anime for this scene to be adapted. As season two is likely to cover the entire Shibuya Incident Arc, which takes place over 60 plus chapters, this particular scene in chapter 145 might not only be a hint at what’s to come in season two in 2023, but also a possible season three.