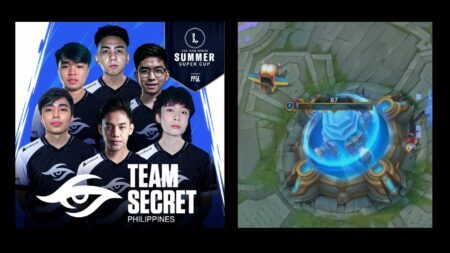 The 2021 Summer Super Cup gave us a lot of exciting Wild Rift action, but the most clutch play came from Team Secret.

Team Secret’s Nexus defense against Vietnam’s Cerberus Esports in the playoffs left audiences in shock, for they managed to turn around a losing game with just 87 HP left on their Nexus.

With nearly all of Team Secret’s towers destroyed, the game looked like a done deal. At the 20-minute mark, Cerberus Bui “BMM” Minh Manh made a backdoor play, and headed straight for Team Secret’s base.

Heri “Tatsurii” Garcia on Ahri rushed back to defend. Landing a Charm on Cerberus BMM, he managed to eliminate him.

Team Secret’s Nexus defense was so clutch that their structure was left standing at 87 HP. This in turn allowed them to march to Cerberus’ base to end the game.

Even though Cerberus Esports ended up winning the series, Team Secret’s Nexus defense will be remembered as one of the best saves in Wild Rift esports.

Team Secret will be gearing up for the SEA Icon Series Fall Season, which will begin in later July.

Team Secret’s Wild Rift roster boasted a lineup of veterans making the jump from the League of Legends scene, including their captain James “Hamez” Santos, who had previously competed at Worlds under Mineski.

The team’s current Wild Rift roster is as follows:

Team Secret is known for pulling creative and out-of-the-box compositions during the SEA Icon Series Philippines, from the “no ADC” lineup to the “chonky boi” lineup. They were the second seed from the Philippines for the Summer Super Cup.