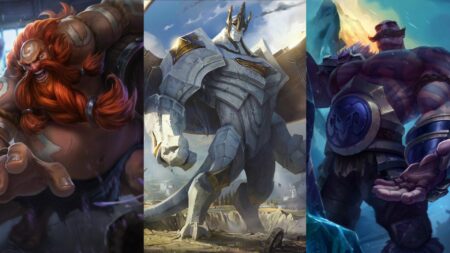 The first day of the group stages of the Wild Rift SEA Icon Series: Summer Season Philippines saw Team Secret go up against defending champions Nexplay Esports. While Nexplay comfortably took the first game, luck was on Secret’s side for Game 2.

Nexplay Esports opted to ban Akali and Camille during the draft phase, which left new champion Galio open for Team Secret. Galio is banned quite often, for he is a champion that can both take massive amounts of damage and also dish it out.

Secret took advantage of that, and picked Galio for their mid laner Tatsurii. They also picked two more tanks, Gragas for Azar, and Braum for Hamez. Rounding up their draft were Trebor’s Vi in the jungle, and Chewy on Kai’Sa as ADC.

Trebor’s Vi initiated team fights, while Tatsurii’s Galio and Azar’s Gragas followed up with a lot of AoE damage.

With Braum’s shields from Hamez diligently guarding Chewy’s Kai’Sa, the ADC was free to jump into the fray without fear.

As the analysts and casters put it, three “chonky bois” acted as the ADC chaperones, which meant that Chewy’s Kai’Sa was untouchable, and had zero deaths in the game.

While Nexplay learned their lesson and banned Galio for Game 3, Team Secret still kept their momentum and won the series with a 2-1 score.

Teams have learned their lesson, and Galio now has the highest ban rate in the tournament so far, according to statistics shared by shoutcaster and analyst Kaisaya.

The group stages will be streamed via PPGL on Twitch and Facebook throughout April and May, with the playoffs scheduled for the first weekend of June.