Tekken 8 trailer explained: What’s next for the top fighting game? 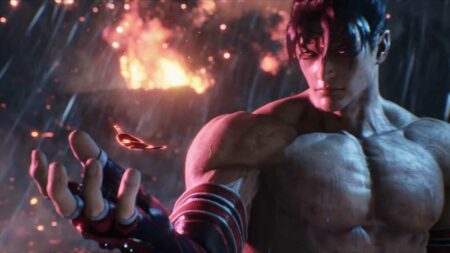 Just a month after teasing fans about a new Tekken project at the multi-game FGC event EVO 2022, Bandai Namco Entertainment finally revealed that the franchise’s latest title will be Tekken 8.

Bandai released the Tekken 8 trailer during PlayStation State of Play, showcasing the series’ main protagonists Jin Kazama and Kazuya Mishima squaring off during a storm. While the trailer was only two minutes long, it gives some insight into what the main title could deliver to its fanbase.

Tekken is making big moves in its latest iteration, and we’ve broken down everything you need to know about the latest Tekken 8 trailer here.

3 things to look forward to from the Tekken 8 trailer

Tekken 8 will focus on the downfall of G Corporation

Following the events of Tekken 7, Kazuya is now at the top of the food chain after taking down his father and the head of the Mishima Zaibatsu, Heihachi Mishima.

But it looks like Jin Kazama is now setting his sights on Kazuya and his company, G Corporation. By the end of the last game, Jin was rounding up his own crew of fighters, including the likes of Lars, Alisa, and Lee Chaolan, the founder of Violet Systems.

In the trailer, you can see the G Corporation logo and a soldier helmet amidst the debris of the fight, which could be a hint about the future of the biotech firm.

Fights are about to get ultra HD

The Tekken 8 trailer’s fight scene saw the father and son trade blows, and we couldn’t help but notice the game’s clear visual upgrade for next-gen consoles. The EWGF looks more electric and the fighter’s bodies look even more chiseled. Even the storm-like stage has dynamic lighting and realistic rain effects.

Tekken’s chief producer Katsuhiro Harada mentioned that the trailer is actually taken directly from the game’s tentative story mode on the PS5, so fans can expect more or less the same visual experience in the actual game.

“It is not a pre-rendered movie but rather a real-time render footage at 60fps, similar to how you would experience the game in versus battle modes,” Harada wrote in a PlayStation blog post.

Regular Jin can now use his Devil Gene

The Tekken 8 trailer also previewed the flashy moves of Jin Kazama. In previous titles, the Tekken team opted to make Jin and his Devil form two different characters due to their different movesets, but that may no longer be the case.

We see the fighter now embracing his alter ego and hitting Kazuya with a supercharged punch that looks to be his new Rage Art. However, keep in mind that this might just be for the story mode to spice things up. In Tekken 7, we were able to play with and against special versions of characters, such as Devil Kazuya and Devil Kazumi, that were not available in versus mode.

You can check out the full Tekken 8 trailer down below:

READ MORE: How you can still win with Fahkumram in a patch 5.0 post-nerf era