Sneakier than a snake edge. 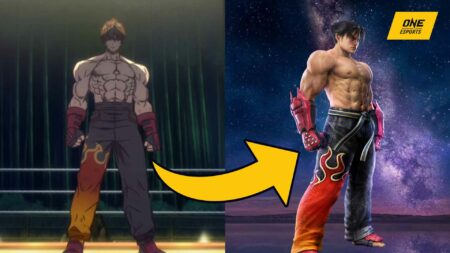 Netflix’s Tekken Bloodline anime unravels the story of Jin Kazama and his mysterious martial arts lineage. Working off almost three decades of lore, the series producers snuck in a few secret references for diehard Tekken fans out there.

Tekken chief producer Katsuhiro Harada also mentioned that the series dives deeper into the relationship between Jin and his mom, Jun Kazama, that reveals new information about Jin’s fighting journey.

Amidst the flashy moves and family feuds, here are 7 Tekken Bloodline Easter eggs that you probably didn’t know about.

Warning: Spoilers if you have yet to watch Tekken Bloodline season 1.

The truth is out, Jin Kazama’s flame pants are not inspired by legendary host and chef, Guy Fieri.

The series reveals that Jin wanted the flame design at a young age as a reminder of his mother’s sacrifice. The flame design resembles the fire that burned their house down during Jun’s fight with Ancient Ogre. The series shows a handful of fights where characters end up breaking walls and floors. Aside from adding some oomph to a punch or Muscle Buster, it’s actually an important part of Tekken gameplay.

Wall and floor breaks reward the attacking player with a few seconds of air time to extend their combo. There are specific stages that have become infamous for having multiple breaks, such as Howard Estate (three walls and one balcony) and Forgotten Realm (three floors).

Dr. Bosconovitch may look like a harmless scientist, but he’s actually a playable fighter in Tekken 3 and Tekken Tag Tournament 2.

Despite only having a minor role in Tekken Bloodline’s story so far, the scientist is responsible for creating numerous fighters for the Tekken tournament. Kidnapped by Kazuya in Tekken 2, he was forced to create Alex and Roger, bio-weapons who enter the tournament as expert boxers.

While working for Jin Kazama in Tekken 6, Dr. B also creates an android named Alisa in the image of his deceased daughter. It’s not a real Tekken adaptation without a few electrifying uppercuts.

The series did an amazing job of showcasing character-specific moves in every battle. Aside from the Electric Wind God Fist (EWGF) of the Mishima clan, we spotted other iconic moves in the Tekken anime.

Just like in the game, Julia Chang charges into her opponents with a Lashing Arrow, a move that hits both high and low areas of an opponent — a certified scrub destroyer.

Xiaoyu goes to a school established by Heihachi

The series briefly touches on Ling Xiaoyu’s life as a student of Mishima Polytech, but it plays a bigger role in the downfall of Heihachi’s conglomerate, the Mishima Zaibatsu.

After receiving an email that warned her about Mishima Zaibatsu in Tekken 4, Xiaoyu decides to ditch school and enter the tournament to find Jin and reveal the dark truth behind Heihachi’s company.

Despite discovering the inner workings of Mishima Zaibatsu, Xiaoyu still recognizes Heihachi as her mentor. In Tekken 5, she even tried saving the entire Mishima clan by time-traveling to the past and stopping the old man from throwing Kazuya off a cliff. In certain fights of Tekken Bloodline, you’ll see characters glowing red or yellow, and it’s not just for aesthetic purposes.

Players have the ability to ki-charge for bonus attack properties, such as counter-hit and 1.4-1.5x damage on the first hit of a combo. This can be seen in the first episode when Jun attacks Jin with glowing hands, the visual cue of a ki-charged fighter.

A newer mechanic called Rage — which gives a character a glowing red aura — also appears when Jin takes a nasty punch from King. The fight scene is pretty faithful to the game since Rage only activates you’re down to 20% health. If you listen closely, you can even hear the Rage sound effect.

Introduced in Tekken 6, the Rage system increases the damage output of your moves. By Tekken 7, the developers added Rage Arts and Rage Drives that consume a player’s Rage status for a special attack, similar to EX Specials in Street Fighter. 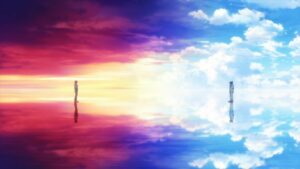 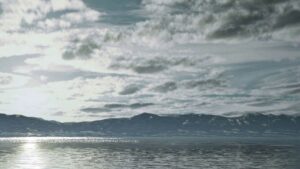 The blue sky and setting sun are common motifs of hope and resolution in many anime shows, but Bloodline’s own version of it might look quite familiar to Tekken fans.

After getting shot by Heihachi, Jin reunites with his deceased mother one last time in what looks to be the afterlife. Jin stands in the bright blue sky area while his mother appears just meters away in a sunset background. Once Jin recollects his thoughts, he returns to reality unscathed by activating the Devil Gene.

The serene view bears similarities to the day and night variants of Infinite Azure, the signature infinite stage of Tekken 7. What’s more, Infinite Azure doesn’t host any fights in the Tekken 7 story mode, which could further imply that it exists beyond the physical realm.

You can check out what Infinite Azure looks like in the clip down below: