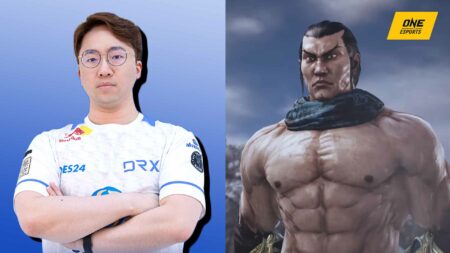 DRX Knee now reigns as the people’s champ after taking down a 2.5D character in the EVO 2022 Tekken 7 grand final.

Out of all the fighters Bae “Knee” Jae-min could dominate with, he brought out Feng Wei against Imran “Khan” Khan’s Geese Howard. Aside from having a solid move list featuring the elusive Kenpo step, Feng just so happens to be the main of Tekken chief producer Katsuhiro Harada.

In the last round of game two, the Korean Tekken god used a lift kick (df+3) to secure a wall combo, and even parried one of Geese’s punches for a quick counter-hit string.

As Khan tried to corner him into the wall, DRX Knee sneaked in an Evading Palm Strike (uf+2) to take championship point.

Knee continued his dominance in game three by getting up close and personal with Khan.

Once the Feng player parried one low jab, he sent the Pakistani pro flying with a juggle. Now gaining the health advantage, Knee created distance by backdashing during Khan’s jabs.

After numerous attempts at breaking Knee’s defense, Khan got desperate and used Geese’s Rage Drive, which the Korean player immediately saw coming. The Feng player ducked right under the high attack and took out Khan with only a second to spare.

With the championship victory, Knee went home with US$7,200 and 550 Tekken World Tour points, the most points a player can obtain in one tournament during TWT 2022. This is Knee’s third EVO championship, with the first two being EVO Japan 2018 and EVO 2013 (Tekken Tag Tournament 2). DRX Knee’s EVO victory with Feng is a nice surprise for fans who love the original Tekken cast.

2.5D guest characters, such as Street Fighter’s Akuma and Geese from King of Fighters, have been a nightmare for the Tekken competitive scene. Aside from having the Rage mechanic, these characters are equipped with projectiles, high jumps, and meters that the regular Tekken character simply doesn’t have.

In the TWT 2019 Finals, Yuta “Chikurin” Take swept the grand finals with a pocket pick of Akuma, showcasing how broken meter-burn combos were on the biggest Tekken stage.

Even after a barrage of nerfs, the Raging Demon is still a top-tier pick in the current scene. Known Akuma specialist Vincent “Super Akouma” Homan made it to the top 8 of EVO 2022 while the tournament’s top 64 featured three more Akuma players. Funnily enough, there were more Akumas in the Tekken 7 bracket than the SFV bracket.

With all that’s been said, Knee’s killer Feng Wei shows that it’ll take more than just meter-burns to win a Tekken championship.