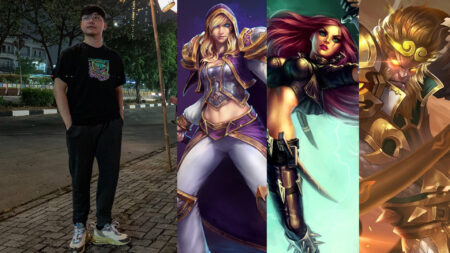 Bjorn “Zeys” Ong has been a pro player or coach for 13 years across five different esports titles. He’s currently the head coach of MPL Indonesia’s EVOS Legends — the team he led to win MPL Indonesia Season 4 and the Mobile Legends M1 World Championship,

Growing up, he’s put in a lot of time and effort grinding leaderboards in many other games. The reason why he so invested in so many games is that since young he was “addicted to improving”.

Starting off with online games like Gunbound, Maplestory, Rakion, GunZ, and Warcraft III, Zeys said on Facebook that he was hooked on optimizing his characters, climbing to the highest levels, and unlocking the rarest achievements.

Coach Zeys reflects on his long and arduous journey in esports

Despite his long and successful esports career, he still has some regrets. “I was doing really good in Hearthstone: I was the first person in Singapore to reach Legend at high ranks, I was ranked second in the world on GosuGamers. My biggest regret is that I chose to stop,” Zeys told ONE Esports.

While he was topping Hearthstone ladders, Zeys was also excelling in League of Legends. A Challenger-tier player, he received offers to play for semi-pro teams.

At 17 years old, the young Zeys believed that it would be “a lot more stressful” competing in Hearthstone compared to League of Legends. “I chose to take the easier route because I didn’t want to be mentally taxed,” shared Zeys.

However, he soon realized that there were many factors at play, especially in a team game like LoL. Team dynamics was important, but due to internal issues, combined with the fact that he was going to enlist in the army for compulsory National Service soon, Zeys decided to give up on LoL.

Still, the winds continued to blow favorably for the gaming prodigy. The year that Zeys began National Service, Heroes of the Storm was released. A new MOBA to hit the market, Zeys decided to dabble in it for fun after he completed his duties each day. He became so good that he was again offered a place on a semi-pro team that won a national tournament in Singapore, the very first competition they entered.

“I told myself that within these two years, I’m not giving my 100%, and yet I’m able to achieve this kind of results where I can go into international tournaments. What’s to say if I gave my 100%? How would that turn to look?”

Taking a chance on himself, he decided to pursue esports full time after completing his two years of National Service. So for the next one and a half years, he practiced Heroes of the Storm every single day without any funding or a salary, doing it entirely out of passion.

Even though Zeys was heavily invested in HOTS, by 2017, he started to recognize that prospects in Asia were limited.

“HOTS was only growing in the Western region like Europe and America. I received offers to go to America and Europe to play for teams, but at that point, thinking back, Singapore’s average wage was pretty high, so it didn’t make logical sense to me to just give up everything in Singapore just to go aboard to earn the same kind of salary that I could make in Singapore, which is why I didn’t accept all the offers,” he said.

“That was something that I hugely regret, which was why I accepted this EVOS offer to go overseas, because I declined so many offers to go overseas in the past. I wanted to see what would happen if I actually took an offer to go fulltime abroad.”

Picking up on the emerging mobile gaming trend, he eventually dropped PC games for Arena of Valor. To him, “it made a lot of sense to transition, to be the first mover to a mobile game” as he could cement himself as a pioneer in a new field.

He was also influenced by his friends, former pro HOTS players in China who went into Honor of Kings (what AoV is called in China), gained a large fan base, and were making a “substantial amount of money”.

Zeys expected the same success in AoV as it was the international version of the same game, but bad luck struck again. “Unfortunately, it was poorly managed. From there, I felt that the game had no prospects so I moved to Mobile Legends,” he said.

Starting out as a pro Mobile Legends: Bang Bang player, he transitioned to a coaching role with EVOS Legends, and has firmly established himself within the MLBB esports scene. From not knowing what he really wanted as a teenager, to jumping from game to game, genre to genre, it seems that he’s finally found a place to call home.

While he’s already won an MPL ID league title and has an international championship under his belt, Zeys is still highly driven. “For me, I just want to cement EVOS as the best team in Mobile Legends history.”