The land of the free, a redesigned trophy, and Lil Nas X — Worlds 2022 is looking to be pretty epic!

After two years of practicing a hybrid bubble setup due to the COVID-19 pandemic, LoL Esports is heading to the streets of North America for this year’s League of Legends World Championship. The tournament will run for more than a month, kicking off in Mexico and concluding in California.

Ahead of the tournament, Riot Games teamed up with luxury jeweler Tiffany & Co. to give the iconic Summoner’s Cup championship trophy a modern look and a more ergonomic form using “sterling silver, fine silver, stainless steel, brass, and wood” according to the video game company.

We know you’re dying for the tournament to begin, so here’s everything you need to know about League of Legends Worlds 2022, including its full schedule, participating teams, format, prize pool, and where to watch its livestreams.

What is League of Legends Worlds 2022?

Worlds is the annual League of Legends World Championship. It is organized by developers Riot Games, and it is the largest global tournament in LoL esports.

This year, a total of 24 teams from around the globe will compete for the coveted Summoner’s Cup championship trophy, the lion’s share of over US$2 million prize pool, and the 12th world championship title.

Worlds 2022 will take place from September 29 to November 5.

T1 and Edward Gaming advance to the Worlds 2022 quarterfinals.

Rogue and DRX advance to the Worlds 2022 quarterfinals.
*Tiebreaker for first place

Royal Never Give Up and Gen.G advance to the Worlds 2022 quarterfinals.
*Tiebreaker for first place

Fnatic and DRX have qualified for the Worlds 2022 Group Stage.

Evil Geniuses and Royal Never Give Up have qualified for the Group Stage.

The competition has three stages: Play-In Stage, Group Stage, and the Knockout Stage.

All 12 participating teams have been divided into two groups of six during the draw show. The first seed of CBLOL, LJL, LCO, LLA, and TCL, the second seed of PCS and VCS, the third seed of LCS and LEC, and the fourth seed of LCK, LEC, and LPL regions are among the 12.

A total of 16 teams, including the four that qualified from the Play-In Stage, have been drawn into four groups of four (A, B, C, and D).

Among these Group Stage teams are the first and second seed of LCK, LPL, LEC, and LCS regions, and the first seed of PCS and VCS.

The Group Stage will be played in a double round-robin best-of-one format. The top two teams in each group will advance to the Knockout Stage while the bottom two teams will be eliminated.

The remaining eight teams will play in a single-elimination bracket where first placed-teams will face off second-placed teams from another group in a best-of-five series. 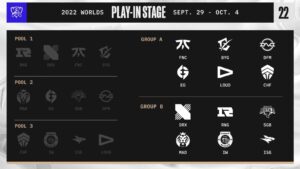 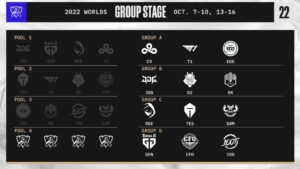 Since the CIS region (League of Legends Continental League) will not be able to send a representative to Worlds 2022, Riot Games has granted the European league (LEC) a fourth slot.

LEC “has had the best performance during international events over the past two years, but does not already have four team berths” according to an official statement by LoL Esports.

League of Legends Worlds 2022 will be held in the following venues, touring parts of North America:

READ MORE: You should only buy Guardian Angel under these circumstances, LS advises