Breathing new life into the organization. 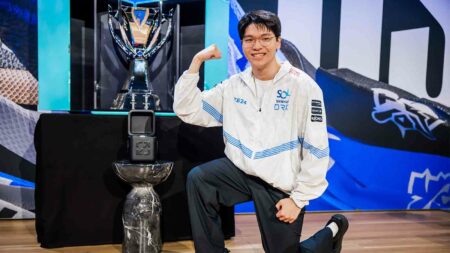 It seems unlikely now for Hanwha Life Esports to finish last in the LCK again in 2023.

HLE finished 8th in LCK Spring 2021 and last place during Summer, and had failed to qualify for playoffs in both splits.

“We sincerely welcome Kingen, who has strong team fighting abilities, and Zeka, who is a versatile player with super plays,” the organization wrote on Twitter.

Kingen, Zeka, Clid, Viper, and Life will compete as one at Hanwha Life Esports for LCK 2023

Former DRX bot lane star Kim “Deft” Hyuk-kyu was the first to announce his new home with DWG KIA, who had won the Worlds 2020 title.

Both Kingen and Zeka will be bringing additional experience gained from their time spent in the LPL, just like former Edward Gaming Worlds 2021 winner, Viper. The top laner started his career with APK Prince and KT Rolster, before moving to China in 2020 to join a struggling Bilibili Gaming. That Summer, the team finished 12th out of 17 teams, and failed to make playoffs.

Zeka joined Bilibili Gaming one year after in 2021, departing from ⁠Vici Gaming. While they did manage to qualify for playoffs, their journey ended early after they were swept by Team WE, finishing 7th-8th.

Joining forces at DRX, the squad did the impossible, scraping through regional qualifiers, and making history as the first fourth seed Play-Ins team to qualify for a Worlds final. Defeating T1 3-2, they earned the highest honor in League of Legends esports.

Top laner Lee “DuDu” Dong-ju is still contracted to HLE, and will likely fill in as their substitute top laner.

Additionally, the organization announced that former Gen.G and FunPlus Phoenix jungler Kim “Clid” Tae-min, as well his former Gen.G teammate and support Kim “Life” Jeong-min, have signed with the team.