The importance of mid is clear. 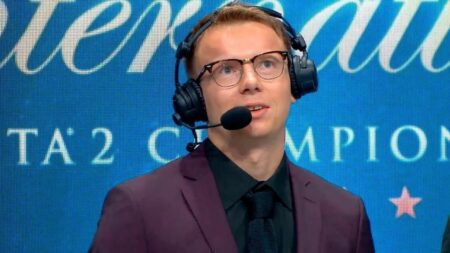 Peter “ppd” Dager shared his thoughts on PSG.LGD over the weekend on his Twitter account. The 29-year old winner of The International 5 believes that without their superstar midlaner, the Chinese stack will likely run into problems at The International 10.

“PSG.LGD without NothingToSay may still place top five at TI, but will no longer be the favorites,” wrote ppd.

So far, the organization is still working on getting Cheng “NothingToSay” Jin Xiang a visa to travel to Romania for TI10. The team’s coach, Zhang “xiao8” Ning has been standing in, and recently won

Ppd Compares PSG.LGD to how Evil Geniuses performed at The International 5

The former captain of Evil Geniuses has high expectations for PSG.LGD, but he believes the focal point of the team is NothingToSay.

The other two core players, Wang “Ame” Chunyu and Zhang “Faith_bian” Ruida, are there to make space until he can carry the team to victory late game.

Still, PSG.LGD has been on fire lately

The last time NothingToSay played a lan tournament with his team was during the WePlay AniMajor, where PSG.LGD won the title. NothingToSay and the rest of the squad also grabbed another championship at the online tournament OGA Dota PIT Season 5: China.

In their last two major appearances, coach Zhang “xiao8” Ning had to stand in for the team. Despite the roster change, the team finished second at ESL One Fall 2021, and won the SAPPHIRE OGA Dota PIT Invitational title, proving that PSG.LGD is still a force to be reckoned with.