What heroes do you think are the best? 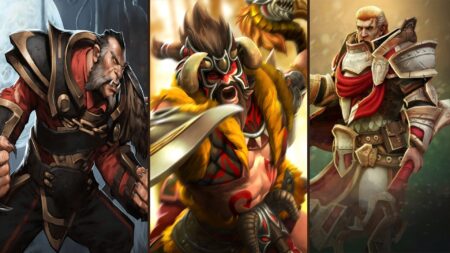 Playing pubs can be a roller coaster in any MOBA. To grind MMR in Dota 2 is no exception, as it can be a frustrating experience, especially when a new patch drops and players are scrambling to figure out what works and what doesn’t.

Dota 2 patch 7.30b was recently released and with it came big changes to the meta. Static farming and ultra-late game carries are a thing of the past, for Dota 2 patch 7.30b prioritizes strong pushing lineups and faster-paced games.

Due to the meta shift, heroes who push lanes quickly have risen in popularity and win rate. At the same time, heroes who can stall out the game and keep their allies alive are doing well.

Here’s a look at the heroes worth mastering to grind MMR.

The best hero in each role to grind MMR in Dota 2 patch 7.30b

Lycan is a flexible hero who can be played in any of the three core roles. Lycan is most commonly picked as the team’s carry and has great success in that role.

Lycan currently boasts the highest win rate in all Dota 2 patch 7.30b matches above the Legend bracket. Lycan is independent in the lane thanks to Feral Impulse, and is a great pusher with Wolves and Helm of the Overlord, while Shapeshift allows him to easily burst down most supports by himself.

Lycan requires decent micro control to utilize his full potential. In patch 7.30b, Lycan’s independence and ability to end games quickly make him the best carry to grind MMR with.

Batrider was the third most contested hero in the recent ESL One Fall 2021. The hero is similar to Lycan as both are versatile in their roles. Batrider is most successful when played in the midlane.

Batrider is a laning beast that most heroes have trouble going up against. Batrider can snowball his lane advantage by securing kills in other lanes. Players prioritize Batrider’s mobility by purchasing Boots of Travel and Blink Dagger in Dota 2 patch 7.30b.

Late in the game, Batrider is able to isolate his opponents, allowing for quick pickoffs. This ability, combined with flying vision, makes Batrider one of the best heroes to grind MMR in the midlane.

Beastmaster can only be played in the offlane, and is the best offlaner in Dota 2 patch 7.30b. The buff to Beastmaster’s Boar damage makes it impossible for most heroes to trade hits against him in the early game. Beastmaster is also naturally tanky, and works well in this meta.

With the rework of Helm of the Overlord, Beastmaster can take control of the game by himself during the mid-game. The aura from Vladimir’s Offering combined with ancient creeps makes it easy to deathball to victory. Beastmaster can typically push faster than almost everyone, including Lycan.

Beastmaster is no slouch when the game goes late either. Primal Roar is one of the best magic-immunity piercing spells in the game. If you play the offlane role, mastering Beastmaster is the fastest way to grind MMR in Dota 2 patch 7.30b

It seems that no matter how many times Nyx Assassin gets nerfed, he’ll always be a viable support that’s easy to grind MMR with. Dota 2 patch 7.30b reduced Nyx Assassin’s regen from Aghanim Scepter slightly, but Nyx is still strong because he has multiple stuns, invisibility, and Mana Burn.

Nyx can hunt down enemies during the early game and bring them down by himself, which is a valuable ability for a support to have. Spiked Carapace stuns any enemy who hits Nyx Assassin, which is perfect against the current meta heroes like Sven, Keeper of the Light, Batrider, and Pangolier who do a lot of spread damage.

Nyx Assassin has one of the best Aghanim Scepter upgrades. It allows him to burrow underground and take reduced damage, and buffs the range of his spells, allowing Nyx to function as a fantastic base defender and attacker.

While Nyx has a weak laning stage, he more than makes up for it once the mid-game starts. He’s definitely one of the best team fight supports out there to get some Dota 2 MMR.

Those buffs are nice, but it is the meta shift that has benefitted Omniknight the most. Multiple melee carries such as Sven, Monkey King, and Lycan have risen in prominence, and Omniknight is the best support to pair with them.

Omniknight can sustain his melee carries in the lane, ensuring they can secure early game farm. Omniknight can also remove stuns later on and provide them with an incredible 50% status resistance buff. This is very useful against long-duration stuns like Beastmaster’s Primal Roar.

Omniknight is simple to use, but don’t let that fool you. Omniknight’s combination of support spells along with one of the best defensive ultimates makes him well worth playing as a support to grind MMR.