T1 will face PSG.LGD next. 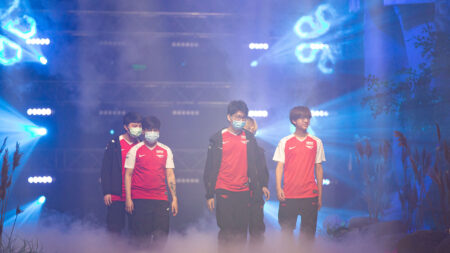 T1 have continued to shock audiences at the WePlay AniMajor Playoffs, advancing to the Upper Bracket Final under the leadership of team captain, Carlo “Kuku” Palad.

As the last team representing Southeast Asia, T1 have shown that their strategies and strength are more than enough to compete against the best Dota 2 squads in the world. The team’s performance at the WePlay AniMajor also shows they are ready to compete in The International 10, which is scheduled to take place from August 5 to 15.

Kuku led T1 against Team Aster and Quincy Crew in the Upper Bracket of the Playoffs, proving that he is one of the best team captains in the DPC.

Kuku can get T1 through deficits or impossible team fights

T1 have been using unorthodox core picks that throw enemy teams off their game. After losing the first game, T1 drafted a midlane Doom for Karl “Karl” Baldovino and an offlane Dragon Knight for Kuku. The interchangeable core picks allowed T1 to have favorable lane matchups, allowing T1 to get a better start for Karl and Kuku.

They used that small lead to get a quick Blink Dagger and Black King Bar on Karl and Kuku. These items prevented Quincy Crew from finding any openings. The top-seeded North American squad was then picked off by Nuengnara “23savage” Teeramahanon’s Terrorblade, once he finished farming his late game items.

The South American squad had to battle through adversity in the final game of the series. Quincy Crew surprised T1 using their own unorthodox picks, with a hard carry Nature’s Prophet, midlane Wind Ranger, and offlane Broodmother that dominated all the lanes.

Kuku was able to keep his team in the game by having everyone play ultra defensively. T1 avoided team fights and only engaged when Quincy Crew overextended themselves. Kuku also knew that his team was more balanced, with 23savage’s Phantom Assassin being the best carry in the game.

Quincy Crew stayed in the game by having their Nature’s Prophet and Broodmother cut creep waves and push the sidelines. T1 knew that the longer the game continued, the more they would be at risk to Quincy Crew’s backdoor plays. This is why they decided to go for an all-in push to the Radiant base, which won them the series.

In an interview during the DPC 2021 SEA Season 2 Upper Division, Kuku shared that “[T1] cannot play Dota without their master.” Kuku was not able to join T1 for the ONE Esports Singapore Major after testing positive for COVID-19.

T1 was eventually eliminated from the ONE Esports Singapore Major’s Wild Card after finishing with a 2-8 record. With Kuku in the lineup at the WePlay AniMajor, T1 is currently 4-1 in the Playoffs.

T1 weren’t the only big winners from the Upper Bracket. Chinese squad PSG.LGD also defeated a surging Team Nigma squad and sent them to the Lower Bracket. In the elimination matches, we saw Vici Gaming send Team Spirit home.

Evil Geniuses won their elimination match against TNC Predator. This means that TNC Predator exited the WePlay AniMajor without earning enough DPC Points to qualify for The International 10. The Filipino squad will have to go through the Regional Qualifiers if they hope to enter TI10.